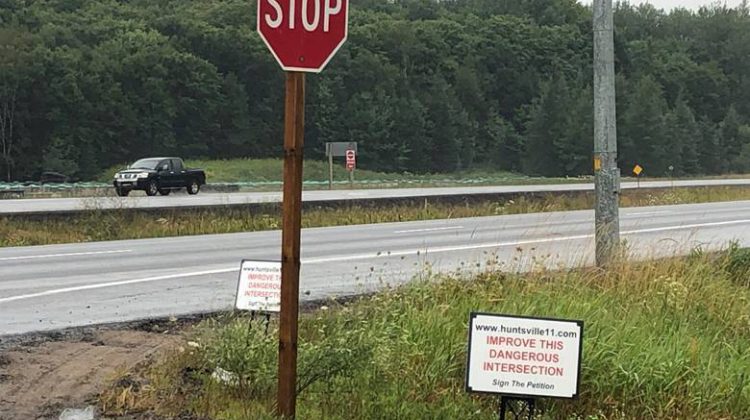 A supplied photo of one of the signs.

HUNTSVILLE, ON- Drivers along Highway 11 between Huntsville and Bracebridge may spot some new signage over the next few days.

According to an announcement from Safer Highway 11 Muskoka, a group advocating for improvements to the highway corridor between the two communities, seven signs have been placed at the at-grade intersections along the route, warning about the dangers of the crossings.

“Over the past decade there have been nearly 700 accidents along this stretch of highway,” said spokesperson Kevin Powers, in a press release.

“The previous government said replacing the intersections would significantly improve safety but did nothing. Now’s the chance for this government to do the right thing.”

The group is calling on the provincial government to replace the seven intersections with two overpasses.

The signs are placed between Stephenson Rd. 1 and Lindgren Rd. E.

Both are asking drivers to sign a petition, which has racked up nearly 400 signatures from concerned residents.

“We have the support of Cottage Associations, businesses and politicians, and we are hopeful the provincial government will listen and put this project on its priority list for next year,” said Powers, in the release.

The MyMuskokaNow.com newsroom spoke with the group earlier in the summer. That story can be found here: https://www.mymuskokanow.com/92174/group-asking-for-safe-interchanges-on-highway-11-2/