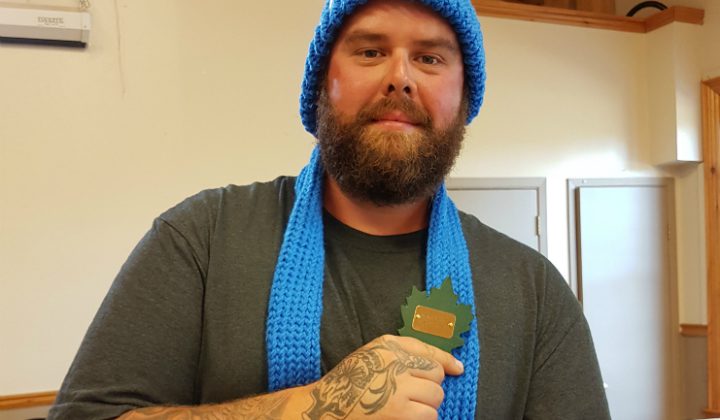 Rob Hendry shows off some of the spoils of being Old Grouch 2019 of Port Sydney, including a toque and scarf in town village sign colours. Port Sydney/Utterson Chamber of Commerce supplied photo)

PORT SYDNEY, ON – A community campaign to find a new ‘Old Grouch’ has been a success.

The Port Sydney/Utterson  Chamber of commerce has used the tagline “Port Sydney – the home of 800 nice families and one old grouch” for a number of years.

But it was decided that it’s Old Grouch and associated damaged signs needed some updating, so a campaign was organized to replace the late George Wilson.

It turns out the new grouch, Rob Hendry, a new resident could be vying for Mr. Congeniality honours as he took 302 of 646 votes cast to be the new curmudgeon on the block.

Nearly $600 was raised in the process in support of the 13 competitors.

Hendry’s campaign centred around a relatable complaint about insects in summer.

‘When them darn bugs won’t let you enjoy the beautiful deck’ – had him leading the competition from the time he entered.

Mr. Hendry was honoured on Saturday, August 24th during an Awards Ceremony held at Port Sydney Community Hall during the End of Summer Dinner hosted by the Port Sydney Parks and Recreation Group.

Chamber President Derek Watson-Brown presented him with his prizes which included: a locally crafted walking stick; a hat and scarf set to match the village sign colours; a basket of snacks donated by Smith’s Ultramar; and various tourism information from the Chamber office that will help him to explore the region.

As the 2019 Grouch, he will also receive a complimentary meal and a seat of honour at this year’s Turkey Dinner (being held on September 28th) and his photo will be featured on a 2020 Grouch Calendar.