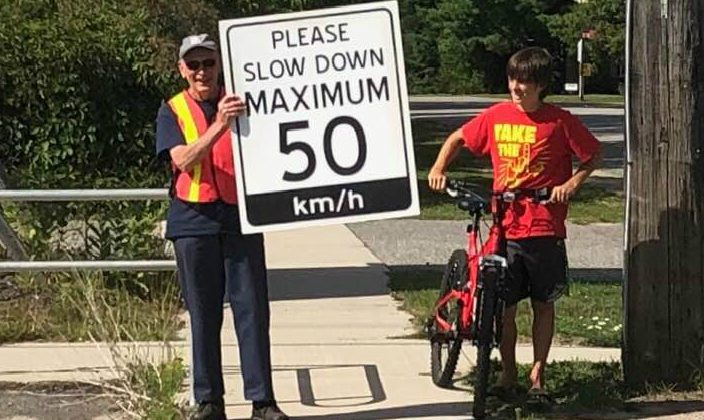 Bruce Thomas is a one man speed enforcement zone in Baysville. (Facebook photo)

BAYSVILLE, ON – A community member in Baysville is running a one-man campaign to slow drivers down.

Bruce Thomas spends a few hours every day in the small town in Lake of Bays displaying an oversized 50 KM per hour sign that also reads ‘Please Slow Down’. He waves and thanks those he estimates to be within the limit and he points vigorously to the sign for those he deems to be speeding.

“It is just my little bit to keep things safer around here,” Thomas said with a chuckle. This summer his street time has been limited as he recovers from some health issues but in recent weeks he has been putting some shifts in.

“I go for an hour or so in the morning, then again at lunch and then after work,” said the retired school teacher.

He said Huntsville OPP has been supportive of his efforts. Last summer a speed monitoring sign revealed 5,000 cars went through the town in a month with an average speed of 72 kilometres per hour. Thomas said after a month of sign campaigning the speed dropped by nearly 10 kilometres per hour.

“So I think it works, just having that personal interaction,” said Thomas.

Thomas sets up on the main road through town and generally has a smile on his face unless you have a heavy foot. With a new school year a couple of weeks off he wanted to get his summer campaign going and get people thinking about what speed to drive through Baysville.