Canine cunning used to keep geese on the move in Gravenhurst 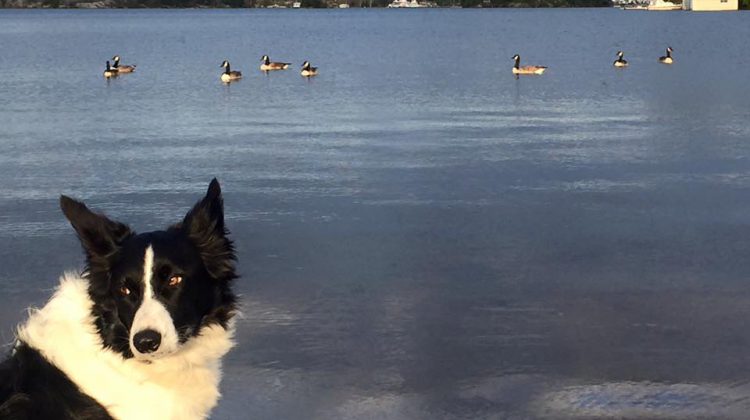 Sam is one of three border collies used to keep geese on the move and out of Town of Gravenhurst parks and beaches. (Muskoka Goose Control Photo)

GRAVENHURST, ON – A story about frequent swim advisories this summer at Gull Lake prompted a response from a contractor for the Town of Gravenhurst.

Kim French owns Muskoka Goose Control, a company that uses dogs and various techniques to move geese out of the town’s parks and swimming areas.

She contends goose feces is not a big problem at the beach area because she and her crew clean buckets of it up every day. However, she did admit that resident ducks, which she is not contracted to deal with, also defecate and could contribute to e.coli levels rising in the water and triggering a swim advisory.

“When we first started working there we would clean up four or five buckets of poo from Gull Lake, two or three times a day,” she recounted. “So it is interesting to me that (the health unit) still say it is the geese.”

She said there seems to be less feces this year but more swim advisories in place. Swim advisories let swimmers know that e.coli is present in the water and could contribute to itchy skin or waterborne illness if water is ingested.

French’s company uses border collies that herd and create a predatory fear among geese that land in the contracted parks.

“So we can effectively move geese from properties, especially geese flying around looking for a place to stay for the day,” said French. “We can move those quite easily because they will just feel there is too much to bother us there.”

She said that even the arrival of their van elicits a signal from the male, known as a gander. Once the dogs, called Becca, Sam and Maverick are in motion the geese take off or swim away.

“We try and park in different areas and come in from various angles so there is an element of surprise,” said French.

She speaks of West Gravenhurst Beach as a real success story, citing that it was a mess with waterfowl droppings five years ago. Now it is one of the better places in the area to enjoy on a hot day.