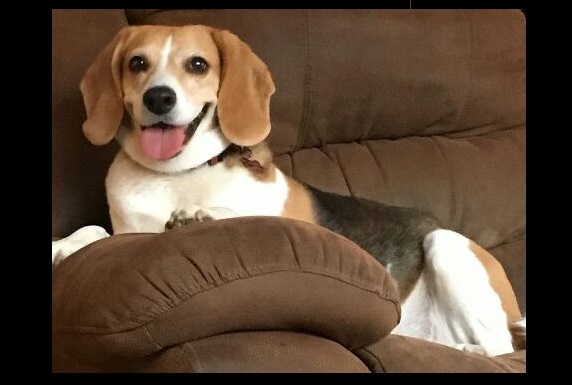 A photo of Brook, submitted by Howie Fisher.

PARRY SOUND, ON- Howie Fisher wants to know who killed his dog.

On Saturday night, around 10:00 p.m., Fisher’s dog Brook was hit by a driver heading past 21 Cascade Street at a high speed. At the time of the incident, the driver didn’t stop until they reached the intersection of Cascade and William Street, where two people who were in the vehicle got out to inspect the damage.

After they took a look at the vehicle, they got back in and drove away. Brook, who was a 10 year old beagle, was killed on impact.

At 34 years old, Fisher is a life-long resident of Parry Sound, and believes someone must know something about what happened. He would have gotten in his truck and pursued the vehicle on Sunday, but had been more focused on getting Brook off the street.

“The dog is terrified of vehicles, she’s never on the road,” said Fisher.

“When we used her in the bush when we were hunting, she was always behind the ATV’s, so she’s very nervous around vehicles. Biggest question we have is how she got on the road.”

Fisher believes she had gotten out of the house through the sliding glass back door, which may have been open slightly. He indicated that Brook knew how to open the door wider with her nose.

He wants to talk to the driver who hit her to figure out what made her dart out the door and across the road.

“I hate to say it, but maybe somebody hit her on purpose, I don’t know,” said Fisher.

“There are lots of people who run turtles and rabbits and raccoons over on purpose, right? Some people have that mentality. Some people don’t believe in swerving for anything. We’re just trying to get some closure, because we just buried our 13 year old Labrador two weeks ago.”

Fisher has filed a report with the West Parry Sound OPP about the incident, and is hopeful that people in the community may have more information about what happened.

He is also concerned about the habits of drivers who head down Cascade Street, with many going at a high rate of speed. He wants to see an increased OPP presence on the route, or speedbumps, and said many of his neighbours agreed with him about the need for slow-downs in the area.