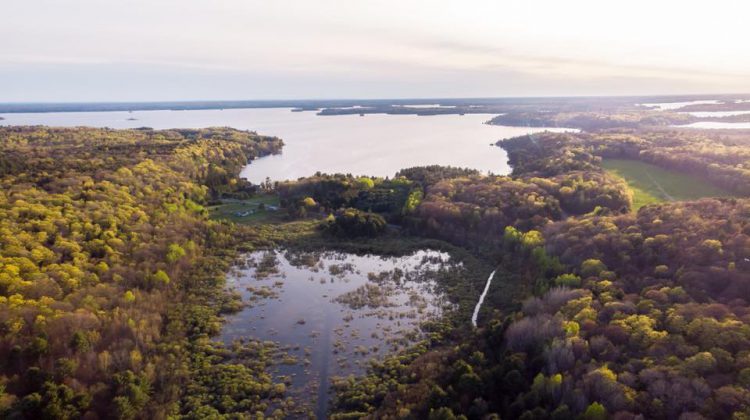 This aerial photo shows the area in question with Lake Muskoka in the background. (Facebook Photo)

BRACEBRIDGE, ON – A group trying to protect the environmental legacy of a proposed wetland development thinks an endorsement by the Bracebridge Chamber of Commerce is premature.

The piece of land in question is off of Stephens Bay Road and has been chosen by developer Muskoka Royale to build a private international boarding school. It would include residences and campus buildings.

Michael Appleby is the President of the South Bracebridge Environmental Protection Group. He says until an up-to-date proper assessment of the lands in question is complete, all talk of development should be halted.

“Until the results of the survey have been publicly released, it would even be a waste of time to have a second public meeting,” said Appleby. “Unless of course (the town) thinks it would be prudent to have a second meeting on the rezoning for the purposes of debating the necessity of a wetlands evaluation.”

Appleby says the environmental report put forward by the proponent Muskoka Royale is incomplete and needs more up to date information in his opinion.

“If (George Chen. the project developer) thinks this okay, he should have no problems ‘paying the freight’,”  he offered, referring to a new environmental report.

Appleby said he would like to see an independent report done by the Ministry of Natural Resources and Forestry and from there informed decisions could be made.

“Until the Ministry comes in and does a wetland assessment we don’t know what (Muskoka Royale and the town) should and should not do,” contended Appleby.

He points out that as a concept he is not against the development, just that it needs to go through the proper protocols to make sure there is not a rush to develop and environmental impacts come later.

“I think there are huge attributes to putting a school such as this into town or anywhere in Muskoka for that matter,” said Appleby.

In a letter to council in support of Muskoka Royale, Chamber President David Borland threw the group’s support behind the development.

“The Board of Directors and I would like to voice our position on the Muskoka Royale College Project. From a Chamber perspective, we as a Board thoroughly support this project. This type of development is exactly what we want to welcome to our community for its prosperity and growth,” wrote Borland.  “Unlike other schools, we have seen come and go, George Chen is a man who is looking to invest in our community to create a legacy project his family can be proud of for years to come. In his eyes, this project is seen as a long term project partnered with his ability to inject significant investment to ensure its success.”

Appleby feels the chamber may have too much influence with the council.

“Chambers of Commerce always have sway with council, no matter where you are,” he said. “It’s not surprising to me that they would put out a recommendation like this. I don’t think this is necessarily a rush to judgement because I have had business discussions with people on both sides of this.”

Appleby, whose group numbers around 150 in terms of supporters, said the bottom line is the environmental assessment needs to be done before any more decisions are made.