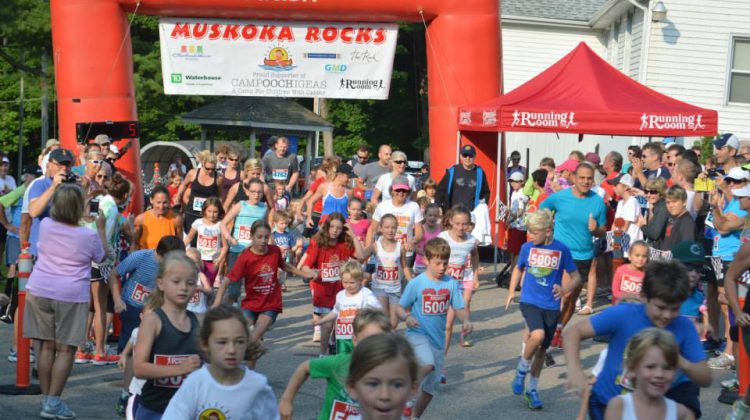 kids taking off at The Magical 1k Run. (Photo supplied by Muskoka Rocks Run's Facebook page dated August 6, 2014)
MINNETT, ON – Funds aimed at helping kids with cancer go to camp are going to be raised this weekend.

The money will come from the annual Muskoka Rocks Run, back for its 16th year on Saturday, August 4th.

The event has provided kids with cancer over 2,300 days of camp since getting started.

This weekend, participants can choose between five km and 10 km routes, which they can walk or run. The races begin and end at the Peninsula Recreation Centre in Minnett.

All the funds raised go towards Camp Oochigeas, which provides children with cancer a safe place to get the same summer experience other kids their age do.

Lynn Keane started the event with her running partner Laurel Brooks. Keane said they couldn’t have picked a better cause.

“The doctors and camp volunteers that are there are angels,” Keane said. “The kids are given their medication and chemo if they have to have it. There’s a beautiful legacy garden, which I am happy to say we have been able to support for the campers and their families.”

As for the run itself, the co-director described the five km route as a “nice and gentle one,” but the 10 km is a bit more challenging. There will also be The Magical 1k Kids Run which starts before the big races.

“It has turned into this incredible event that everyone seems to get involved in,” Keane said. “They get a medal and a t-shirt. It is quite remarkable to see these kids who don’t necessarily have any challenges or issues come out and support their fellow peers.”

While Keane said she has done the big city races, she said there is nothing like a close-knit community race like this. She sees the same runners every year and the race keeps getting bigger because those who come back always bring more runners with them.

The co-director asked anyone still looking to participate to preregister by visiting the event website. She added there will be registration at the event, but with races set to begin at 9 .m., they tend to get busy and can’t ensure everyone will get a spot.

Keane added that kids stay either one or two weeks at Camp Oochigeas and the run has raised around $700,000 since it’s inception.