VAUGHAN, ON- A press conference by the Ontario Provincial Police to update the public on four missing seniors was essentially a renewed call for the public to assist in the investigation.

Little new information was brought forward at the event held in Vaughan, Ontario. 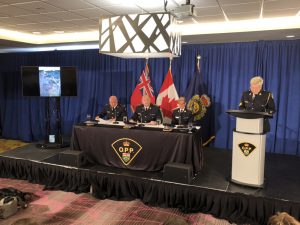 The OPP held a press conference in Vaughan, Ontario to renew a call for witnesses to come forward in the decades old missing persons case. (James Wood, MyMuskokaNow.com)

Matthews repeatedly deferred on giving details due to an ongoing investigation taking place. He spoke of interactions with various old age homes that all four were connected to.

“We are confident that people who lived or worked in the Huntsville area when these four vulnerable victims went missing have information to help us resolve this case. We are now providing another opportunity for them to bring crucial information forward,” Matthews said in a statement released prior to the actual press conference.

One property was located at 970 Yearley Road and some resided at a farm property at 132 North Lancelot Road west of Huntsville. Each missing person had health challenges – some had mobility issues – during their time at the properties. Their remains have never been located.

He spoke of meeting Lawrence, the so-called Cat Lady, when he attended the property with a Huntsville Fire Chief. He remembered the squalid conditions she lived in, with 30 cats in an 8 x 10 shed.

“She lived there two years and had endured two Muskoka winters,” recalled Matthews.

Upon returning with a public health inspector a short time later she was no longer in the shed and had been moved to a van, a fact which was previously not released by police.

Matthews said 46 past residents had lived in one or more of the properties. 16 persons died at the properties with 12 of those deaths reported to the authorities.

The remaining four are the missing seniors. Matthews did reveal that those 12 did have cheques cashed after they had died. Their deaths were properly reported and coroner’s investigations were conducted.

When asked why police were making an appeal now, Matthews said that sometimes time is on the side of an investigation.

“We know the four missing people are not alive,” he said. “Someone out there has information. There is a possibility there are past residents, employees that may know something.”

Matthews was asked why evidence, such as the photos, some as old as 21 years, were being released now.

“As major case managers we all receive a significant amount of training keep info tight at hand,” he explained. “We’ve chosen to release photos to hopefully spur someone on.”

OPP Interim Deputy Commissioner Paul Beesley stressed to the assembled media that this case has never been considered a cold case and has always had resources and people working on it.

Large areas of the investigation were off-limits to reporters with Matthews time and again stating he could not comment on the evidence.

Matthews was asked what he would say to the Laan family, long thought to be suspects in the case, and who might well have been watching the press conference.

“The time is right to come forward and report what you know to the police,” he said.

When asked if there were any other suspects beyond the Laans, Matthews simply cited in any investigation there are constantly people that can be considered as a possible suspect, but he would not verify if anyone else had been a possibility in committing the crimes.

The press conference comes after a recent podcast by CBC focused in on the cases.

Rewards for information have been posted since early 1998 for each victim and remain actively in place. Anyone with new information can call a dedicated missing persons hotline toll-free at 1-877-934-6363 (1-877-9-FINDME) in Canada only or 1-705-330-4144 from outside Canada. You can also submit information by e-mail at opp.isb.resolve@opp.ca.