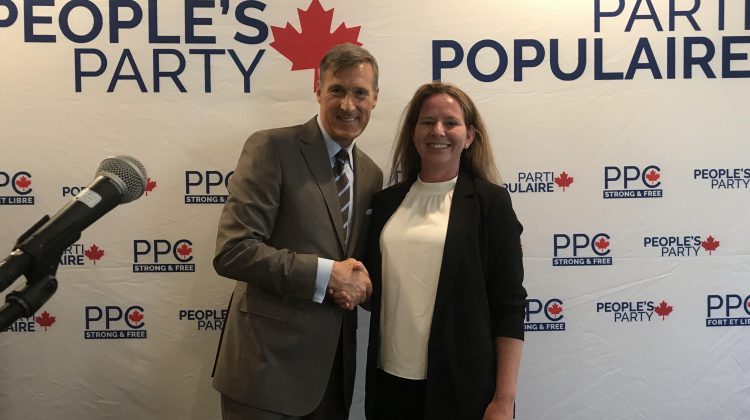 Photo of Bernier and Smith submitted by the party.

MUSKOKA, ON- Another candidate has declared their intentions for the Parry Sound-Muskoka riding.

According to a press release from the People’s Party of Canada, the party has chosen Michelle Smith, who is described as a “year-round” resident of Muskoka and business owner.

In the release, Smith expressed excitement to join the PPC, which was founded by former Conservative Party of Canada MP Maxime Bernier. Bernier split from the Conservatives after an unsuccessful run at the party’s leadership.

The release notes that Smith runs a local cleaning business, and has worked in manufacturing, supporting operations, marketing and sales. It also says that she has a background in social services though her works as a job developer in both Parry Sound and Muskoka, assisting Ontario Works and Ontario Disability Support Program clients.

“I am excited to share our Canada first platform with residents of Parry Sound-Muskoka. We want to do politics differently!” Smith said, in the release.

“We support a smaller, more centralized government with less regulation. We plan to review the billions of dollars spent on foreign aid, keeping more money in Canada to benefit Canadians. We will scrap the Federal Carbon Tax, end corporate welfare and abolish supply management.”

The announcement ended by stating Smith is looking forward to getting out into the community, and talking to riding residents.

The move places Smith as one of five people looking to replace outgoing MP Tony Clement. The others are the Liberal’s Trisha Cowie, NDP candidate Tom Young, Conservative candidate Scott Aitchison, and the Green’s Gord Miller.