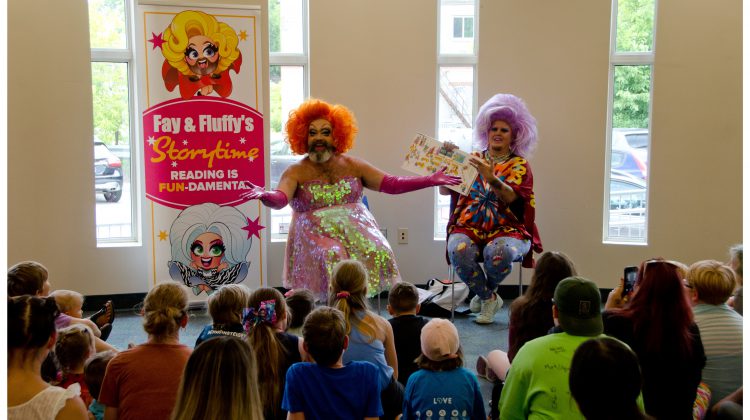 HUNTSVILLE, ON- A pair of drag queens read stories to a crowd of kids and parents at the Huntsville library this Monday.

From 2:00 p.m. to 3:00 p.m., drag queens Fay Slift and Fluffy Soufflé read six books to around 90 kids and their parents in the library’s activity room. The pair, who have been doing storytimes since June of 2016, had come up from Toronto for the event. 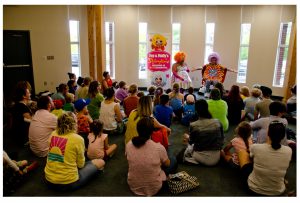 Tickets were free, with 85 available. It opened with an introduction by the pair, and a reading of “All Are Welcome”, a book aimed at the celebration of diversity.

According to Soufflé, the children present sat for the full 45-minute reading time. She described the event as phenomenal, and said it couldn’t have been better.

“We even read an extra book, which doesn’t’ usually happen, because kids get squirmy,” said Soufflé.

“45 minutes is a long time to sit around and listen to stories, but we read six books, and everyone had such a great time.”

The Huntsville event had come together after the pair had done speaking engagements with library associations across Ontario. A representative of the Huntsville library had seen them speak, and invited them to come north.

“It’s just a matter of inviting us up. As we’ve said, it doesn’t matter how small the town is, there are LGBTQ families in every town, and libraries are always supposed to be places where everybody is welcome. It’s a community hub, it’s a place where people can gather. By showing the community that the library is a safe space, and an inclusive space, and wants to represent diversity, bringing in a program like this is just perfect to represent something like that. It brings people together.”

They also said that people in the community likely know someone who is part of the LGBTQ community, and that the story time was a way to build an “army of allies”.

“We’re building kids to be able to just accept people for how they are, and accept diversity, and accept that families are different, and everybody is different, but everybody’s uniqueness is what brings us together and makes communities more fun and more special, and more diverse,” said Soufflé.

As for what they would say to anyone who disagreed with the story time being held, Soufflé said any questions about the event being inappropriate for children or the idea of the performers teaching kids things they shouldn’t know would be “ridiculous”.

“It’s so nice to see a world where kids are accepting, because kids don’t come out of the womb, thinking about hate,” said Soufflé.

“Kids are taught hate. And so for us to come and have all these kids be excited and excited about each other, and about diversity, and seeing different people in the room, that they would see in their neighbourhoods but maybe not know anything about, to see two moms or two dads or gender non-confirming kids, it’s just great for us.”

The event was the first time the Huntsville library had hosted a drag queen story time.

EDITORS NOTE: Souffle asked to be referred to by their performance name and persona.