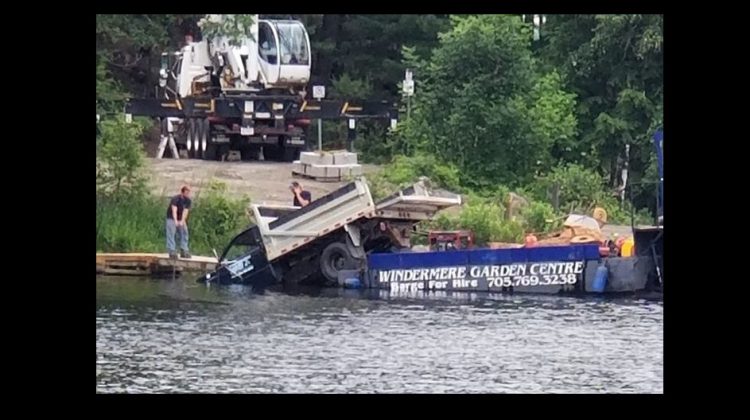 The scene of the barge and truck is shown in Milford Bay on July 11th, 2019. Photo courtesy of Brandis Smith.

MILFORD BAY, ON- A truck falling off a barge won’t have much of an impact on Lake Muskoka.

That’s according to Ryan Murrell, the fire chief for the Township of Muskoka Lakes.

According to Murrell, firefighters responded to the Church Road boat launch late this morning, after a truck slid off a barge near the launch.

Video posted to social media showed the launch attempting to keep the truck from sliding all the way off by revving it’s engine, though it was eventually half-submerged.

According to Murrell, firefighters found no occupants in the truck and no one at the scene was injured. When they arrived, the truck was already out of the water.

Booms were placed in the area to contain any spilled material, and Murrell stated that the area was cleared by the afternoon.

He indicated the owners of the truck will have to contact the provincial environment ministry about what happened. He also didn’t anticipate much environmental damage.

“From the pictures I saw, and the comments from my people, I don’t see much of an impact,” said Murrell.

How the truck slid off the barge remains unknown.