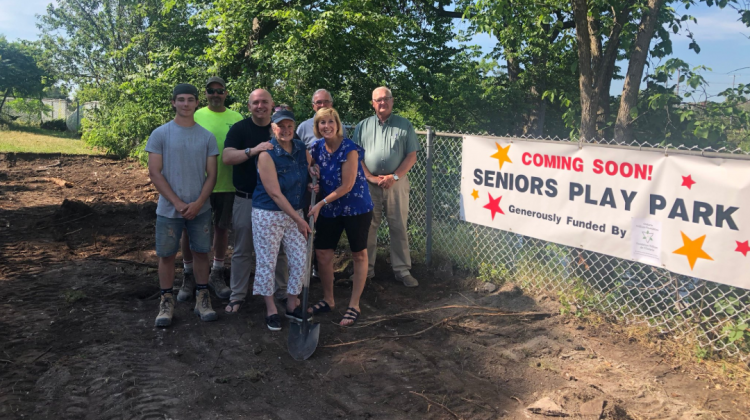 HALIBURTON, ON – What started as a local project could turn provincial.

Ontario’s Minister of Infrastructure, Laurie Scott, believes that an initiative launched in her riding could translate to similar projects across the province.

Scott was in Fenelon Falls last week for the groundbreaking ceremony on what was named the Senior’s Play Park, which she says is designed to give people of an older nature a place to go an exercise, socialize, and enjoy nature.

According to the MPP for Haliburton-Kawartha Lakes-Brock, the recreational space promotes “social and active lifestyles in seniors,” she goes on to explain the park when finished would be accessible to seniors with mobility issues.

“This is an outdoor park that is built to accommodate your ability and mobility challenges,” says Scott.

She says that the park idea was created by a local in Fenelon Falls that wanted to find a way to give community members a place to go. The project itself was made possible through Trillium grants says Scott.

Once the park opens in roughly six weeks, Scott encourages people to come to see it and get a sense of what this can do for the ageing members of municipalities, regions and the province.

Although this park is in her riding, Minister Scott tells MyHaliburtonNow.com that she thinks it’s entirely possible that if this park is successful it could spark the idea in communities across Ontario.

“ I think it’s like anything if you see a good idea, you see it implemented, it will inspire this to be replicated in other areas,” Scott says

She went on to say that this idea could be especially inspiring for Ontarians as the senior population continues to grow.

“I see it as one of those things that’s going to be replicated throughout the province and probably the country.”