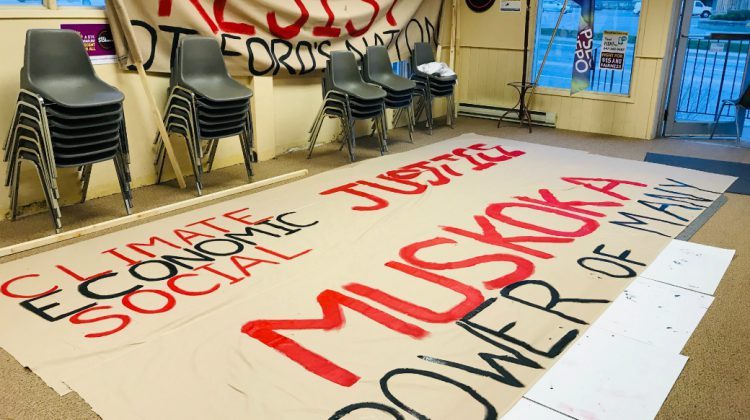 The Muskoka Power of Many is going to be protesting with signs on overpasses along Highway 11 this afternoon from Severn to Gravenhurst. (Diana McConnell photo)

BRACEBRIDGE, ON – They are called the Muskoka Power of Many.

A number of local groups will be banding together to protest Doug Ford and the Ontario Conservative government this afternoon.

Armed with signs featuring anti-Ford and anti-Miller slogans they will be greeting visitors to the area along Highway 11 between Severn Bridge and Gravenhurst between 3:00 and 5:00 pm. There will be three groups of protesters setting up on the Rainbow Circle, Sedore Road and Kilworthy overpasses as the Friday long-weekend traffic makes its way up the highway.

Co-organizer Diana McConnell said they got the idea from protesters in North Bay who held a similar action recently.

“We just want (MPP Norm Miller) to know that we are still here and not happy about all the cuts,” she said. McConnell said she got a meeting with Miller recently to talk about her group, a minimum wage increase group called Fight for 15. She appreciated the time he took with her, but said it is not resulting in any policy changes.

“I’ve been hearing from more and more people that they are having a hard time getting a hold of Norm,” said McConnell. “It wasn’t until I copied my letter to him in the local paper that I actually got a one on one meeting with him.”

The group just wants to remind people visiting Muskoka that the Ford governments cuts in a number of areas has an effect on various parts of the province.

Muskoka Power of Many is an organizing committee of community advocates that deliver prompt solidarity actions in response to cuts and privatization efforts by Doug Ford and Norm Miller’s PC government.

McConnell points to the long list of programs that have been cut or eliminated in recent months as a reason for the action.

“From students to educators, from women’s rights to worker’s rights, from inaction on the climate crisis to the privatization of our healthcare to the defunding of our legal clinics, the list is long and grows longer every day,” said McConnell.