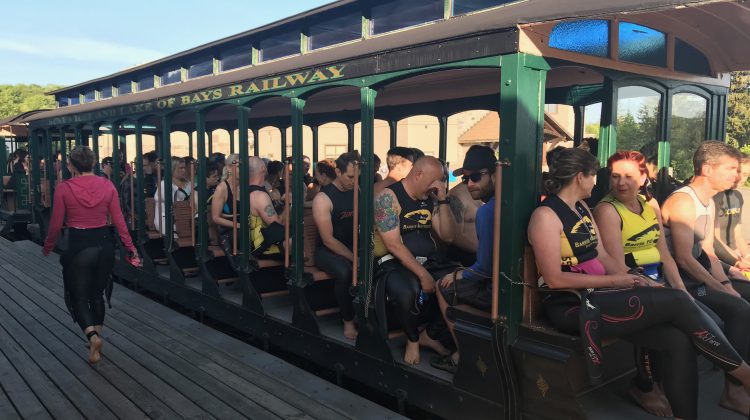 Racers get taken to the start of the swim course by the Portage Flyer train.

HUNTSVILLE, ON – Over four hundred athletes turned out for the fifth annual TriMuskokan race in Huntsville.

A combination of swimming (750m), a 30-kilometre bike ride and 7.5-kilometre run, the top participant, Marek Bialkowski of Parry Sound finished with a total time of 1:22:44. He was followed by Huntsville native Jon Morton who did the course in 1:30:46.

Racers were taken on the historic Portage Flyer train to the start of the swim course.

The swim portion took from 11:00 minutes to around 25 or 30 minutes. The bike portion was around 45 minutes to just over an hour, with the runs in the half hour to 40-minute range with the exception of Bialkowski, who ran a blistering 25:38.

A lot of people prepare specially for this popular race, but for Bialkowski it was his second race this weekend. On Saturday he ran a race in Welland, finishing third, so wanted to get a better result by trying the Tri-Muskoka.

“(Welland) was a tough day for me so I wanted to put some watts down on the bike today which I couldn’t do yesterday, so it was a good day for me,” he said.

The tri-athlete, who is in his 20s, purred the praises of the Huntsville race.

“The course was amazing, it was perfect conditions today,” he said with a smile.

One of the race co-organizers Deb Trenholme was pleased with how the race turned out.

“We sold out the TriMuskokan again this year, had 400 athletes and some as far away as Bermuda,” she said. “Everybody’s here to have fun today and encourage newbies. I heard every other racer this is their first Triathlon.”

There was also a Try-TriMuskokan event for people new to the sport that ran after the main event.

(All photos by Doug Crosse – MyMuskokaNow.com)