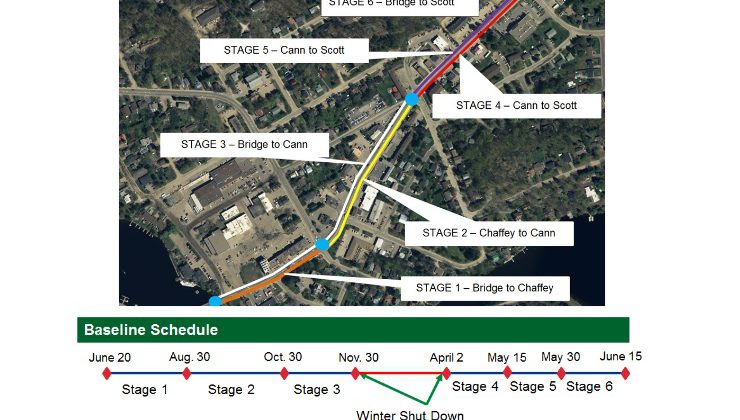 A breakdown of the work schedule for the project, sourced from the District of Muskoka.

HUNTSVILLE, ON- A major route in Huntsville is going to be closed down early next month.

According to the latest agenda for the District of Muskoka, the contract for major resurfacing work along King William Street has been given to John Bravakis Enterprises Limited, for a total payment of $5,902,063.25.

The project being put together for the route includes water and sewer rehabilitation, along with the rebuilding of the road base and driving surface.

The target for completion is late fall or early winter of this year, with construction hoped to start in the late spring.

The impact on the public will be notable, because the work will need partial lane closures and potentially full lane closures for intervals during the road rebuilding, along with brief interruptions of utilities as pipes are removed and replaced.

Under the contract between the district and Bravakis, the start date is June 20th, and the company has indicated to the district that they’re planning to finish their mobilization at the site in the first or second week of July.

It will run in stages until November, then break for winter. After winter, it will run until next June.