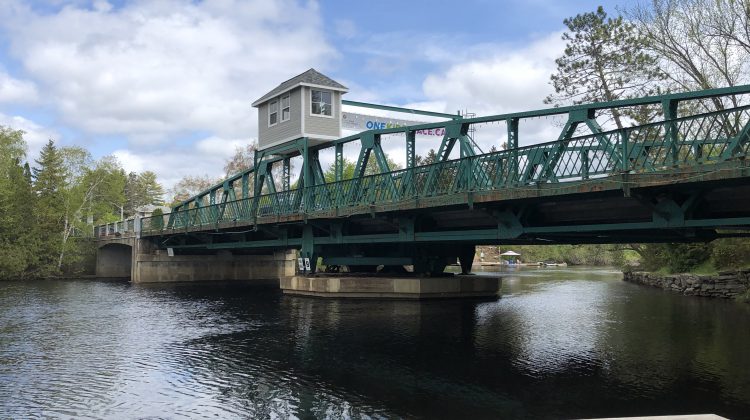 The bridge in downtown Huntsville is shown on May 28th, 2019. Photo by James Wood/MyMuskokaNow.com staff.

HUNTSVILLE, ON- Major changes to Huntsville’s downtown are being suggested to prevent flood damage in the future.

Last Wednesday evening, Huntsville town council held a special meeting at the Algonquin Theatre to go over what had happened during the recent flooding.

The conclusion reached by the town’s engineers about why this year’s flood was more damaging was presented during the event. According to the town’s report, the spring thaw usually lasts four days, but this year it lasted ten.

That longer period caused an increased flow of water, with surrounding lakes getting raised and localized flooding staying for a longer period of time.

That same presentation touched on the impact of the historic downtown swing bridge on Huntsville’s water flows.

According to the town’s report, there was a nearly two-foot difference in water levels on both sides of the bridge, with the bulk of the structure’s central concrete pillar acting as a dam, slowing down the water and spilling it over to the downtown.

Dan Barkwell, the owner of Moose Delaney’s, which was badly affected by the floodwaters, asked council if the removal of the swing bridge could help.

In response, Huntsville Mayor Scott Aitchison indicated there were discussions about replacing the bridge in the past to let more water flow through, but there were arguments against changes driven by the structure’s historical value.

He did say that he would reach out to the District of Muskoka, which is responsible for the crossing, to see if there is a way to modify it, and was concerned about the downstream impacts as well.

“My only point is that it has to be worth looking at,” said Aitchison, speaking to reporters after the meeting.

“It’s got to be worth the conversation, but you have to have that analysis as part of a much broader system, because the faster you put the water through there, the faster it gets further through (the system)”.

He also touched on the possibility of other physical changes, such as a berm or wetland put in place along John Street.

“Wetlands, they help smooth over the peaks and valleys of water as it flows through the system, and that is a prime example where we have literally paved over paradise, and put up a parking lot, and it’s sinking into the swamp,” said Aitchison.

“We didn’t just pave over. First, it was where they threw all the sawdust and the waste from the sawmill that was on the edge of the swamp, then it became the dump where they threw all their cans and bottles, and old cars and things like that. We’ve abused the area, pretty dramatically, and we can’t be surprised now, that this system we’re trying to control is kind of fighting back on us.”

Aitchison believed a berm could be “part of the solution” which would involve naturalizing some of the shoreline there as well. Overall, he believed residents should prepare for a price tag, and for a long period of time to get the work done.

“Just hoping the next flood isn’t going to be as bad is not a solution and it is not an answer anymore,” said Aitchison.

“We cannot continue to operate that way.”

He was also optimistic about support from the province on coming with new watershed management plans, given Premier Doug Ford’s history with Muskoka.

“The premier seems to have a particular affection for the area, and he is remarkably responsive to me,” said Aitchison.

“I called him directly, and he answers his phone, and he wants to know what he can do to help. The province is engaged, at every level.”