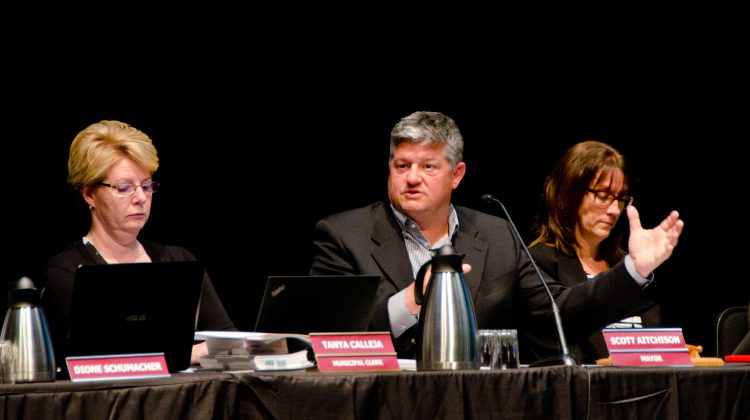 HUNTSVILLE, ON- Mayor Scott Aitchison wants residents to get sandbags from the town.

On Wednesday evening, Huntsville town council held a special meeting at the Algonquin Theatre to go over what had happened during the recent flooding.

The conclusion reached by the town’s engineers about why this year’s flood was more damaging was presented during the event. According to the town’s report, the spring thaw usually lasts four days, but this year it lasted ten.

That longer period caused an increased flow of water, with surrounding lakes getting raised and localized flooding staying for a longer period of time.

The event also featured some questions and answers between the public and council, during which two people raised their concerns about the town government not providing sandbags.

According to the dialogue between council and staff during the event, Huntsville used to provide residents with at least ten sandbags during flood events, but that policy was changed after a stockpile that had been purchased by the town degraded while in storage.

Heading into the 2019 flood, the town policy was to direct residents to sandbag retailers. The two residents who talked about their experiences trying to find sandbags indicated it had been difficult to do, especially in the middle of the flood.

With those experiences in mind, Aitchison now wants the town to provide sandbags, even though they can be ineffective in some situations.

“In those areas where they actually can be effective, to me it just seems like a no-brainer,” said Aitchison.

“Even if, at the end of the day, they work for a little bit and then ultimately don’t work, I think people would feel a little better if we at least tried.”

He believed that it would be worth the expense.

“The incremental cost of the town to maintain a stock of sandbags is nothing compared to what it cost, and the anguish and the difficulty it took for these residents who had to search to find them to begin with, and then had to buy them,” said Aitchison.

“When you’re in the middle of a crisis, like that, just a simple thing like that that at the end of the day costs the town not that much money, could save people a lot more anguish than they’re already going through.”

He acknowledged that it may not be the “be all and end all” when it comes to flood solutions, but said it was something the town could try to show they have compassion.

“We care about people, and we want to try to help, where we can,” said Aitchison.

“In some cases, sandbags can work.”

He promised it would come before council for discussion.