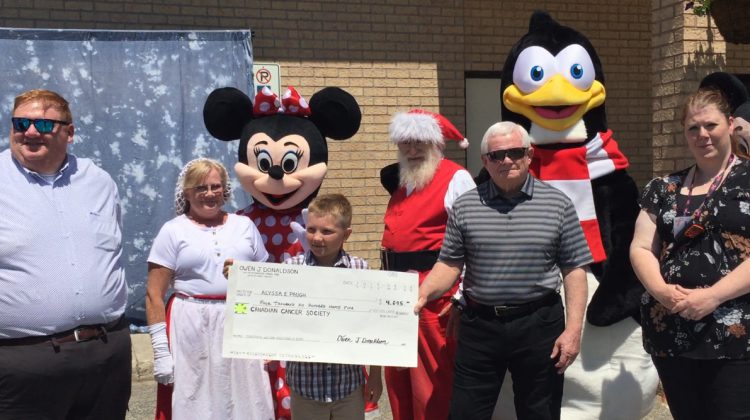 The second annual “Together We Can Help Find A Cure” fundraiser brought vendors, pony and hayrides and costumed characters to the Rotary Club, 131 Wellington Street in Bracebridge.

In a surprising and emotional moment, a young man named Owen Donaldson presented organizer Alyssa Paugh with a cheque for $4,695 that he had raised through various efforts including hitting up his mom’s co-workers at Muskoka Brewery.

“I asked my mom ‘Could we raise money for a cancer-free future’ and she said yes,” recounted the eight-year-old.

“I said to my mom can you please tell the people (in her) work to see if they would like to donate any money and almost all of them did,” said Owen.

Paugh recalled that when Owen came to her with the cheque she was very surprised.

“I near dropped, it was unbelievable,” she said.

Mayor Graydon Smith of Bracebridge and his Gravenhurst counterpart Paul Kelly had a chance to meet with Owen and commended him for his fundraising work.

“Owen is a real hero,” commented Mayor Smith in his opening remarks.

Young families were seen enjoying the various attractions and games of chance.

“It has been a huge success so far,” said Paugh.