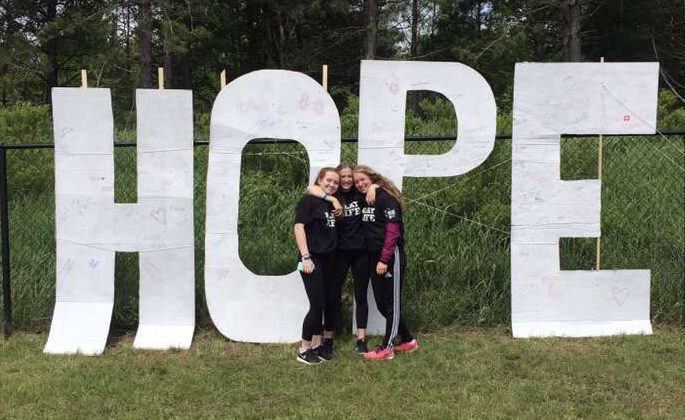 Students from BMLSS pose for pictures at the Relay for Life event in 2017. (Supplied by Brandon Stevens)
Bracebridge, ON – This year’s Relay for Life is already shaping up to be bigger and better than ever but organizers are still looking for more support.

Brandon Stevens is a grade 11 student and is on the event’s committee at Bracebridge and Muskoka Lakes High School (BMLSS).

This is his second year involved with Relay for Life, but the first time he’s helped organize it. The event is aimed at raising cancer awareness and money to find a cure, with participants being sponsored to do laps around the school track.

Stevens said he got involved because the disease has had a big impact on his life.

“Cancer has had an effect on my family, so I thought it would be a good thing to get into,” Stevens said.

“I lost my grandfather on my dad’s side and both grandparents on my mom’s side to cancer.”

Stevens added that over 400 students are signed up for the event on Friday, June 7 which is already more than last year’s walk.

He said the group is constantly promoting it on the morning announcements and offering prizes so he expects more students to sign up.

While only students are allowed to pay to participate and raise money, the rest of the community is more than welcome to come out and join in the festivities.

“We didn’t have as many community members as we’d have liked last year,” Stevens said.

“We are inviting them to come out at any time during the day to do a  lap with us or share their story. We are going to have live music, yoga and Zumba classes, dunk tanks, bubble soccer and all kinds of events throughout the day.”

The walk begins at 9 a.m. at the high school track and will run straight until 9 p.m. Stevens said the goal is to raise $20,000 and the group is currently at $11,000 so they are hoping for a big push over the next couple of days.