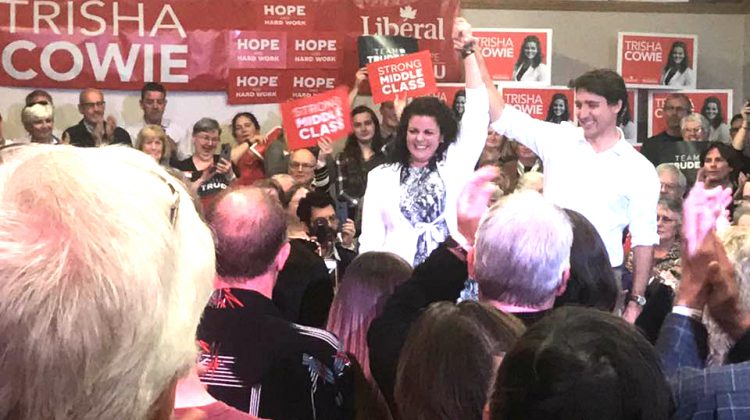 It was a short visit to Muskoka for Canadian Prime Minister Justin Trudeau. 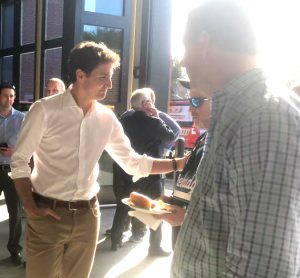 Prime Minister Justin Trudeau meets one of the dozens of volunteers that helped during the recent flood emergency in Bracebridge. (Doug Crosse Photo)

He dropped by a barbeque at the Bracebridge Fire Hall, organized to thank the dozens of volunteers and first responders who worked tirelessly during recent flooding.

Bracebridge Mayor Graydon Smith thanked the PM for providing the support of the military during the declared emergency. Trudeau thanked the volunteers for all their hard work.

“This is what makes Canada great, these moments when we have to roll up our sleeves and lean on each other,” he said to a warm ovation.

Trudeau’s motorcade then whisked him up the highway to Port Sydney for the Liberal Nomination meeting for Parry Sound-Muskoka.

The formal part of the gathering was quite brief as Trisha Cowie was announced as the acclaimed nominee for the riding.

Trudeau and Cowie then entered the stage in the community hall to thunderous applause from 350 supporters.

The Prime Minister told the crowd how his government has helped the middle class and worked at providing affordable housing and sustainable employment.

“We delivered a Canada Child benefit that helps with hundreds of dollars a month, tax-free right across the country for those who need it, and it has lifted 300,000 kids out of poverty,” he said to hearty applause.

He then introduced Cowie enthusiastically, saying “Ladies and gentlemen, dear Liberal friends, our next MP for Parry Sound-Muskoka, Trisha Cowie!”

Cowie spoke of her humble political beginnings in 2015, when she came second to then Progressive Conservative MP and Cabinet Minister Tony Clement.

She insists things will be different this time around. She paid tribute to her former campaign manager Greg Black, who passed away in December of 2017.

She then urged her supporters to help her win the upcoming election.