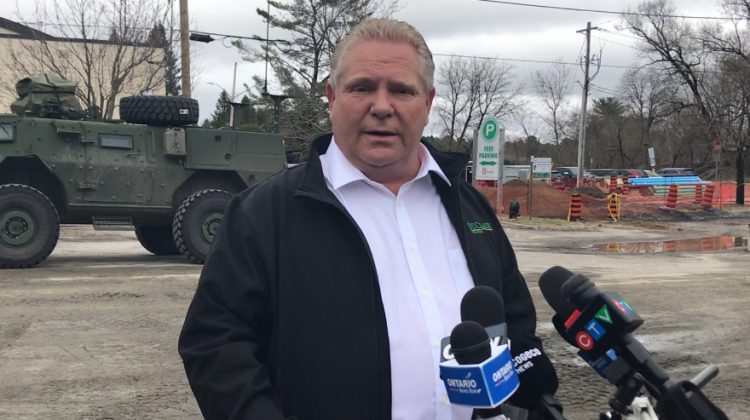 It was a frank and open exchange of ideas.

That was how the meeting between Township of Muskoka Lakes Mayor Phil Harding and Premier Doug Ford’s meeting on Friday was characterized.

Harding was keen to have the Premier’s ear after he had to declare a state of emergency as flood waters in his town rose to historic levels.

“I’m really looking to the province now and looking for the Ford government to step up and identify that we have significant problems across our entire watershed,” said Harding prior to his meeting in Minett with the Premier.

At a media scrum in Bracebridge, Ford said his government was committing $5 million to watershed management in Muskoka and is welcoming key stakeholders to participate in a task force that would lean on local knowledge to try and prevent flooding in the future.

“Our government, we move quick,” said Ford. “When (Mayor Harding) is asking for help and sitting together and putting together a task force I’m open to it.”

Ford says he wants to get this started as early as this coming week.

“We sit down right away and get things moving,” he says. “Get all the ministries involved but most importantly let’s get all the stakeholders for the areas affected, right across the whole Muskoka region.”

Harding says he believes the massive flooding can be traced back to one event that didn’t happen during the run-up to the spring freshet. He said the ministry had the south channel at Bala wide-open, but that only handled roughly 50 per cent of the run-off going through the watershed in Muskoka Lakes and specifically Lake Muskoka.

“The north channel was not wide-open at that particular point,” he explains. “It should have been wide open, it should have been drawn down to a level lower than last year, especially with three times (the snow pack) this year.”

When asked if there was any explanation from the Ministry of Natural Resources and Forestry as to why that hadn’t happened, Harding said, “No.”

Harding wants the whole watershed management program reviewed because he believes it is outdated and using decades old data to drive the models. He points out it was last revised 13 years ago and used data sets from the 1980s and 1990s.

While he concedes that this winter’s 350 cm snowfall was above average things need to change to prevent future massive flood events.

“We really need to understand the entire ecosystem that goes on from Algonquin Park out to Georgian Bay,” offers Harding. “Physical limitations within the watershed, flood plains, how do we manage water?”