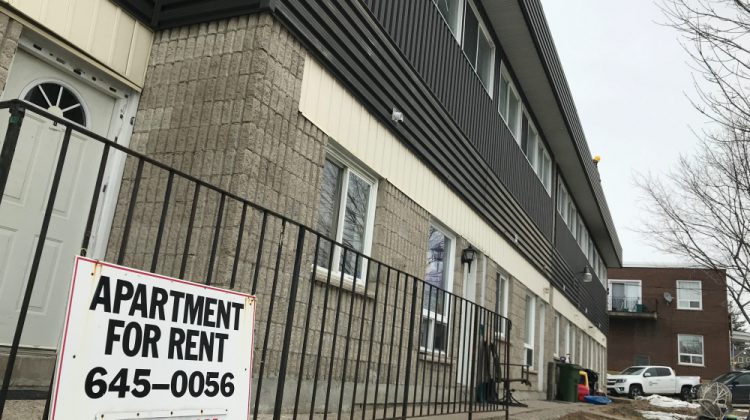 It could be as long as 10 months before displaced tenants from 19 Monck Road get back into their apartments. (Doug Crosse Photo)

Displaced tenants of 19 Monck Road will have temporary housing until the end of the month.

Beyond April 30th it is not clear where they might live or how it will be paid for. Repairs could take as long as 10 months.

Approximately 24 people had to move out of the building after the District issued an unsafe order for some of the apartments in the Bracebridge building. A leaky roof led to extensive flooding.

Manager of Homelessness for the District Sandra Beausoleil says things are changing rapidly as they try and find longer-term housing.

“Things are changing on a daily basis,” says Beausoleil. “We’re trying to find long-term housing for as many people as possible.”

But some tenants are being told that in order to maintain their apartment in the building they must continue to pay rent and beyond April 30th they might have to pay for temporary housing as well.

Beausoleil has heard the same thing and is trying to get things in place to avoid that situation, but there are no guarantees.

“We sort of on the supportive side to the tenants,” she says. “We’re not able as the District to comment on whether they should be or are paying rent going forward, or what they are getting back and when they are getting it back. But certainly, we are linking them with the legal clinics so they can have those legal questions answered.”

She goes on to say, “not many people can afford to pay rent twice in the same month so that is what a lot of our programs are in place for. We will be doing what we can to assist folks so they are not asked to put out rent twice.”

Beausoleil wanted to point out that a number of local businesses have been extremely supportive with donations.   Food Basics, Harvey’s/Swiss Chalet, and McDonald’s have all provided gift cards for the displaced residents.

Tenant David Doyle is now staying at the Knight’s Inn. He doesn’t know where he will be after April 30th. He recently had a kidney transplant and is trying to stay on top of doctor visits, getting meds from the pharmacy all while trying to eat healthier. He says the Monck Road apartment had him five minutes from everything he needs. He now faces a 15 to 20-minute walk each way.

“I thought I was getting a cold the other day,” he says. “I can’t afford to get a cold while trying to recover from all this.”

He says one of the women from the legal clinic brought him some homemade soup the other day, a gesture that meant a lot to him.

Beausoleil says the bottom line is her role is to make sure that people do not become homeless and if that has happened to try and find new housing for them.