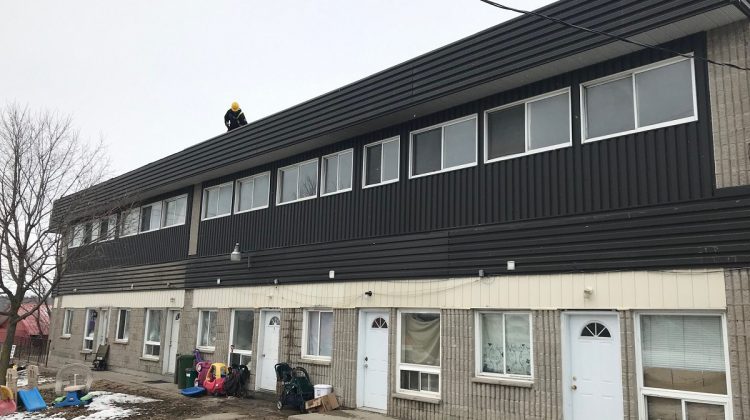 Residents of 19 Monck Street in Bracebridge are unsure of what is happening beyond the next six weeks.

The District of Muskoka has told tenants of the troubled building that short-term housing will be provided by the District for approximately a month and a half, but currently, there is no long-term plan.

20 of 25 of the building’s apartments have been deemed unsafe to live in and an order was issued on April 1st to for those affected to move out.

To date, people living in 17 units have been contacted by the District and those requiring accommodation are being helped. Two to three units were not rented at the time of the unsafe order being issued.

Dustin Appleton, along with his wife and two young children, has moved to his grandfather’s home in Kilworthy. He is very unhappy about the lack of communication from everyone involved.

“As far as I know they’re only concerned it’s up to six weeks and then I guess it’s up to us after that,” says Appleton.

A meeting held by the District at Dominion Church in Bracebridge this afternoon updated residents but was not open to the media. Mel Heatlie, a Program Communications Specialist with the District of Muskoka, said an update is expected in the next few days.

Appleton made an inquiry to landlord Zoe Theodorpoulos about April’s rent just paid, and she told him there would be no refunds.

“She said it is none of her concern to give any rent money they just paid,” he says.

He has also been seeking information on how to recover costs for the thousands of dollars lost through ruined furniture, clothing and electronics. Appleton says a member of the local legal clinic will be trying to initiate a group lawsuit.

Overall Appleton feels there has not been a lot of help in this tough situation.

“It kind of feels like they are leaving everybody in the dark about it,” he says. “And not really giving people as much information as they deserve to have.”

From the Town and District’s perspective because they are dealing with a private building owner there is little if any pressure that can be brought to force action from the landlord Zoe Theodorpoulos.

Appleton says she has been essentially not communicating with tenants for a number of months, though she has been asking people for rent early each month.

“This building has been this way for plenty of years,” he says.

In terms of Appleton and his family, they were already planning to move in with grandfather. These events just sped up the timetable.