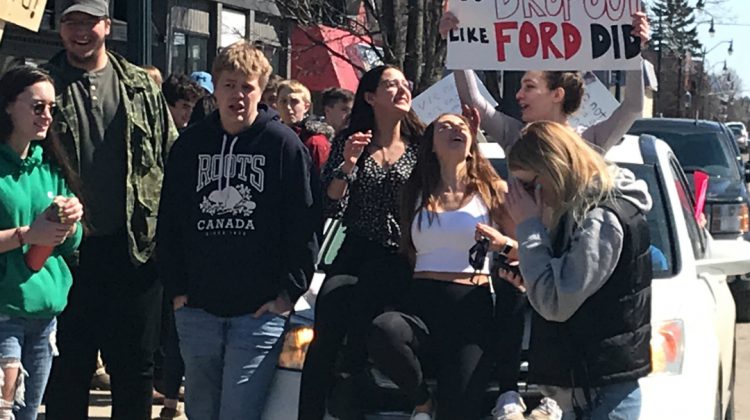 Nearly a hundred students showed up for a protest over proposed increases in class sizes and cuts in programming by the Doug Ford Government. (Doug Crosse Photo)

Students across Parry Sound and Muskoka walked out of class to protest planned cuts by Premier Doug Ford.

One student had a suggestion for Premier Ford.

Chanting ‘Say No to Doug Ford’ and carrying signs, they were energetic and gaining support from drivers who honked as they drove by the march.

The spokesperson for the students, Kendra MacDonald, was pleased by the turnout. She hopes the numbers protesting province-wide will catch the Premier’s attention.

“Doug Ford should realize that what he is doing does not sit well with anyone but himself,” said MacDonald.

She hoped the numbers would be large, saying, “the more we spread it the better it is.”

She said it was more students than she thought would come out, though she admits a number of students opted to go home.

Students across the province are protesting the larger class sizes and an increase in online learning being proposed along with overall cuts to certain programs.