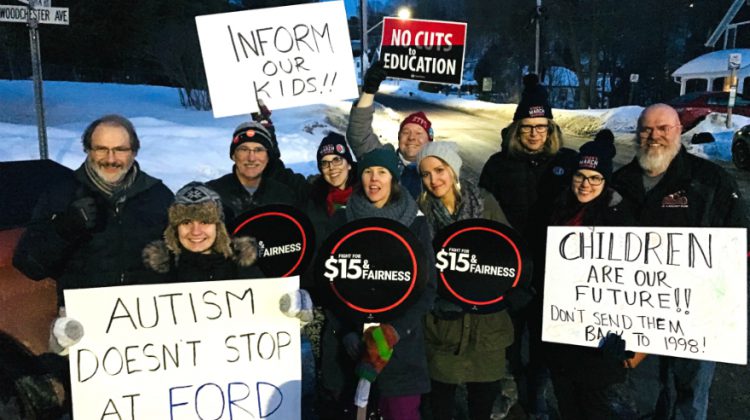 Just some of the approximately 30 protesters on hand at the spaghetti dinner held at the Bracebridge Legion Friday night. (Diana McConnell Photo)

It happened across the street from the spaghetti dinner being held at the Bracebridge Legion Friday night. The event was a $25 per person event, and a hastily organized cross-section of politically motivated residents was on hand to greet the premier.

Ford and Parry Sound-Muskoka MPP Norm Miller arrived around 5:30 with protestors chanting and waving a variety of signs with anti-Ford sentiments. The pair had spent the day visiting businesses in Huntsville, Port Carling, and Bracebridge.

Diana McConnell of the Parry Sound-Muskoka Decent Work Network says her group had about six hours advance notice of the dinner and immediately began organizing the protest through its Facebook page.

“We’ve been working pretty hard at building coalitions with other groups,” she explains. “We were at the rally for education put together by the Ontario Secondary School Teachers Federation. We put out a call to all the labour groups in the area as well as different allies.”

She said it appeared some of Ford’s security people, who were on hand ahead of the Premier’s arrival, made sure the protesters stayed across the street.

“We were hoping Mr. Miller and Mr. Ford would come out and have a conversation but they never did,” says McConnel.

The group stayed until about 7:30pm when the event concluded.