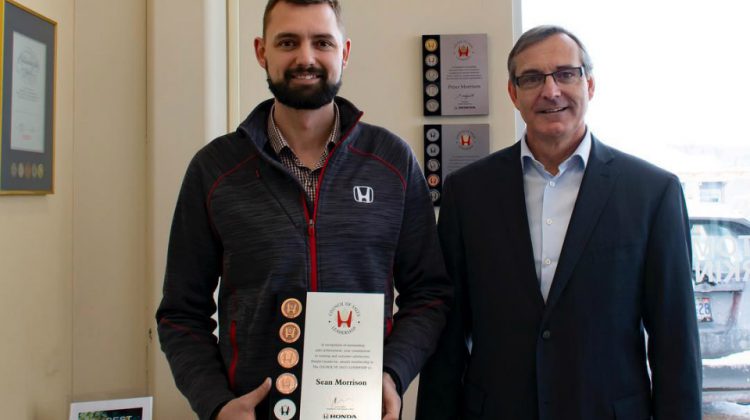 Sean Morrison with Dad Peter (Right) have collected a number of sales awards from Honda over the years. (Instagram photo)

Peter Morrison has been part of the team at Jason Armstrong’s Huntsville Honda for 30 years, but for the last nine, he has been making it happen on the sales floor, winning sales awards each year. Sean Morrison will be at the dealership 10 years in May, and is also filling the trophy shelf from his efforts, taking home the hardware in each of his last five years.

The awards aren’t just for sales volume, but customer satisfaction and professional development.

When the senior Morrison was asked what his best career achievement has been – working with his son was at the top of the list.

“By far it has been being able to work with my son,” agrees Peter. “And not only just to work with him day in and day out but see the success he’s had.”

Sean started life at the dealership as a lot attendant at age 20. He gassed and cleaned the cars, took in trades and plowed the property.  Now, he is racking up the sales awards as he sells vehicles. He says the advice he got from his dad when he first started has stayed with him throughout.

“I think first and foremost it’s a people business,” says Sean.  “We’ve got a great product, we’ve got lots of cars, that’s what people come here to do. Our main objective has to be looking after our customer. I think that is the biggest thing he instilled in me that first year I was doing this. And that stuck with me all the way along.”

Peter says the main thing he has learned over the decades of being in the automotive industry is the experience a customer has at the dealership will be what brings them back in a few years for another new car.

“I think what it really comes down to, the experience,” he says. “How personal it is. I think all dealers try and be as professional as possible. It comes to the customer connection. I like to think that is something dealership-wide is something that Jason instills. People come first and it is a people business.”

The younger Morrison has been keeping a close eye on the new way people are buying cars. It’s not so much a come in and kick the tires experience. Now customers are forearmed with a lot of information, recommendations and pricing info and that means needing to be ready with all the facts.

So is sitting around the dinner table one long chat about cars? Dad says no, but admits the topic does pop up.

“We try to avoid shop talk,” Peter says with a chuckle. “Because we still want to be a family interested in what the family is doing. (Sean’s) got a nice young family but it’s inevitable that it always ends up that we are talking cars at some point or another.”

Sean admits it’s the type of job that could have you chasing the numbers in the beginning, but as he has matured into the role, the realization that it is more than a job has settled in.

“I’ve been really enjoying it,” admits Sean. “Coming to work and enjoying what you do making that commitment to make it a career and not just a paycheque.”