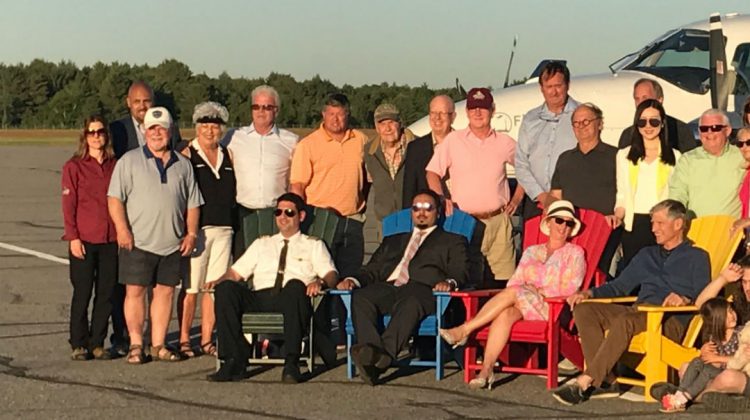 District of Muskoka CAO Micahel Duben (second from left back row) at the launch of FlyGTA's service in June. (Doug Crosse Photo)

The hiring of a CEO for the Muskoka Airport indicates business in the area is ready for takeoff.

Len O’Connor starts next week in the newly created role that began with the creation of an airport board of directors last year.

As Chief Administrative Officer for the District of Muskoka. Michael Duben explains it was time to start realizing some return on an important asset.

“The board felt that we needed somebody who was going to not only support the operations but at the same time be business-minded,” he says. “They can pursue some revenue opportunities, help the board as they move forward I guess to develop a long term plan for the airport.”

The airport, located in Gravenhurst next to highway 11,  sees a high amount of private jet traffic, due to the rich and famous cottagers who summer in the area. There is also, however, discussion about being a hub or transfer point for time-sensitive freight heading north. Right now all options are on the table says Duben.

“I don’t think the board has decided yet what direction they want to go in,” he says. “I think everything is fair game at this point.”

He says the bottom line is the board is full of experts in marketing, business, and aviation and they want someone to chase down those opportunities. As Duben explains, O’Connor has that entrepreneurial spirit from his experience at airports in Niagara and Toronto.

Passenger traffic increased to the Muskoka Airport in 2018 with the introduction of flight taxi service FlyGTA out of Buttonville airport. It is expected to at least maintain last year’s schedule with increases at peak times.

“So the feeling was as the airport sort of moves into the future, rather than just have a focus on operations which our previous manager did we now expect a higher level of business acumen,” says Duben.

One idea that may be considered is bringing back an airshow. There was one in 2010 as part of the 70th anniversary of the Air Battles of Norway and Britain.

“It’s possible,” Duben admits. “We’ve had airshows in the past. I know they’ve been successful and people certainly have liked them. There are other communities that still put on airshows. There are risks associated with airshows and you have to figure out a way to combine with your existing operations whether or not it is scheduled service.”

Job one in the early going, will be attracting business.

“That’s what I think meshes well with what the board has in mind and certainly district council seems to be anxious to get the best out of the asset and if they can generate some revenue then that’s a good thing,” says Duben. “So we are hoping Len will come with some good ideas.”