Local government review not a worry for Bracebridge Mayor 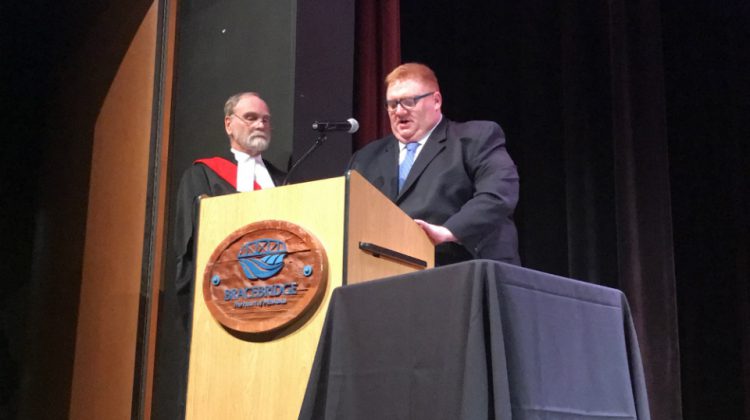 A review of local and regional government does not concern Bracebridge Mayor Graydon Smith.

Asked if the coming review by two special advisors of the province’s various regional governments is making him nervous, Smith said he believed in the process.

What areas does he think would be looked at from a Muskoka perspective?

“I think everyone is always concerned about duplication of services and the most efficient way to deliver those services so I think it is a logical place to start the conversation,” Smith said following Wednesday’s Bracebridge council meeting.  “We had started our own conversation on the size of government at District so I think that needs to be on the table as well.”

He says the way Muskoka runs at regional and local levels is quite different than some of the other regions in Southern Ontario.

“I would just encourage them to look at the specific circumstances that exist in Muskoka and make sure that is part of the decision-making process for them rather than trying to paint everybody with the same brush,” offers Smith. “We are very different as a district than some of the regions in southern Ontario and we need to be looked at as such.

“For us, we have got assessments that are in odd places.  The townships carry the majority of the assessment, the towns don’t which is a very unique situation. Also we don’t have the same growth issues that are occurring throughout the greater Golden Horseshoe.”

Smith, who has been heavily involved with municipal government at a provincial level through the Association of Municipalities of Ontario, says he is confident the two men overseeing the process will understand the differences of Muskoka over other areas.

“Where I take some comfort is the gentlemen that are heading up the process,” admits Smith. “I know them a bit. One them was a regional chair for a long time, Ken Seiling in Waterloo, he just retired and we were on the Association of Municipalities of Ontario Board together and Michael Fenn is a very experienced administrator in the municipal world.

“They know municipalities and they know what we are trying to achieve and I hope that gets translated into whatever decisions they make.”

Smith says that back in the summer when Premier Doug Ford spoke to the AMO, he stressed there would be a very considered approach to any review process.

“The Premier indicated they weren’t interested in making rash decisions or amalgamations,” he recalls. “I think everyone’s mind goes to amalgamations in this scenario.

“I don’t think we can make any assumptions on what the right thing to do is, or that is necessarily the be-all and end-all.”

The review process is happening quickly, with a preliminary report on the outline of the task due to the Premier tomorrow. That will be followed by a detailed consultation plan by January 31st and final recommendations in the summer.