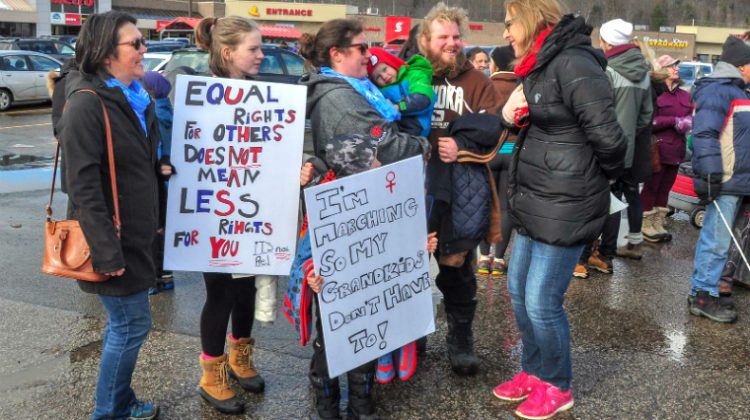 A walk to support women in Muskoka takes place this coming weekend.

The Women’s March Muskoka is set to lead a large group of supporters from the Huntsville Mall to River Mill Park and back this coming Saturday, January 19th.

It is part of a larger initiative taking place worldwide on both the 19th and 20th, with marches in Lagos, Geneva, Kampala, Lusaka, Oahu, Saskatoon, and San Carlos Nuevo.

Organizer Michelle Emson says while the approach is global the issue of women’s rights is very much local. She contends that over 80 per cent of women in Muskoka who have experienced physical abuse never report that crime to police.

“One of the guiding Unity Principles of the Women’s March Movement is inclusivity,” says Emson. “This single guiding principle is at the very core of our walk on Saturday. Yes, we are raising awareness of women’s issues and the injustices of the past but the sustainable solution is a team effort on the part of our community as a whole. We can all be a part of the solution to end violence against women.”

While there are solutions to help at-risk women in the Muskoka region resources are often over-capacity.

In 2014  YWCA Muskoka issued a report called A Statistical Economic and Social Profile of Muskoka.   It revealed that 129 women and 76 children were supported by women’s shelters in Muskoka that year alone, the same shelters that were over capacity for 61 days.

“One solution is to increase capacity but that only addresses the symptom,” says Emson. “The better solution is to eliminate the need for shelters entirely.”

This year will be the third anniversary of the march globally and second locally. The 2017 event saw six million marchers across the globe in support of women’s rights and freedoms. Emson says last year the march in Huntsville numbered around 130 and they are expecting 200 people out this weekend.

It begins at 12:30 at the mall. For more information on the Women’s March Muskoka, you can click here.