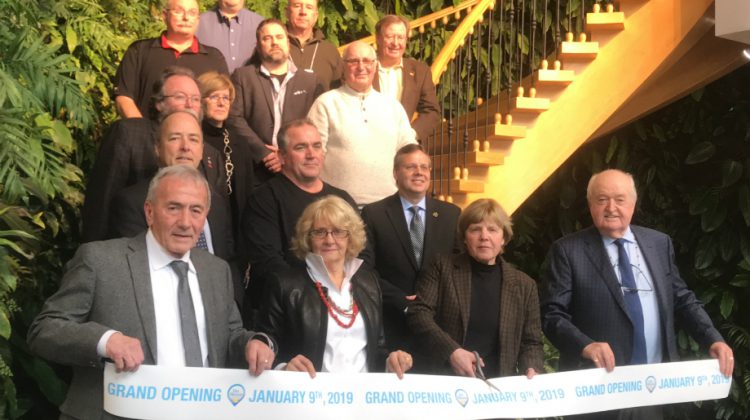 Huntsville Deputy Mayor Karen Terziano (with scissors) and the whole De Novo Board take part in the official ribbon cutting for the De Novo Centre in Huntsville. (Doug Crosse Photo)

A drug and alcohol addiction treatment facility has opened in Huntsville.

The De Novo Centre welcomed members of the Unionized Ontario Construction Trades and local council to the former Summit Centre for the Environment today for the official ribbon cutting.

De Novo, which roughly translated from Italian, means “new beginning”,  helps treat any member of the unionized trades in the province who is battling addiction. The new location in Huntsville replaces one in Sundridge when it opens its doors to clients this coming Monday.

Robert Brooker is the business manager for Local 46 of the United Association of Plumbers, Pipefitters and Welding Professionals. He says there are both negatives and positives to the opening of the treatment centre in Huntsville.

“The negative is we’ve outgrown the old facility because the need for help has increased year over year,” says Brooker. He then added, “a big positive is we have been able to help everyone in need and because of this success we are able to open a new and much larger facility to continue the exceptional work by Marie Lloyd and her dedicated team of counsellors and administrators.”

Deputy Mayor for the Town of Huntsville, Karen Terziano welcomed all the visitors and the De Novo Centre to the area.

“This project has pretty much taken a year since we decided to sell the building to dotting the i’s and crossing the t’s,” said Terziano in her welcoming remarks. “We know that De Novo is going to bring some economic addition to our town. New jobs, business for local suppliers and that is great, we appreciate it.”

Chairman of the De Novo Board of Directors, Patrick Dillon said it was a big day for all the unionized members and trades that contribute to the centre.

“I also hope it is a good day for the Town of Huntsville and that we look forward to being good corporate citizens,” said Dillon.

The facility will be able to treat 32 men and five women before the final expansion that will handle 40 men and 12 women. The Sundridge facility previously had 21 treatment beds and women requiring treatment were sent to the Renascent Centre in Toronto.

Over 4,000 men and 200 women have been treated by the De Novo Centre since it was initially created in Toronto in 1992. It is located at 87 Forbes Hill Drive, Huntsville.