A trio of seniors is proving age is just a number with a book they have published.

An anthology of short stories and poems created by the residents of Castle Peak Retirement Residence has been selling briskly since it was first published in 2016.

The book is called You’re writing a book of shorts stories and poems? At Your Age? and has sold over 1,500 copies.

As if the story of creating the book was not unique in its own right, the committee that helped create it then determine what to do with the funds raised. To date over $20,000 has been brought in from the sales of the book. 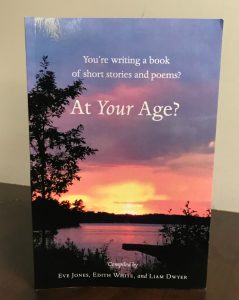 Every time a threshold of another $3000 in sales is achieved, the group sit and determine what groups or organizations will be benefactors of $1000 donations.

Eve Jones says the idea of fundraising came to her when she was totaling the proceeds from the regular bingo game held at the home. She realized there was a thousand dollars and wanted to do something with the money.

“We gave $500 to the hospital and another $500 to the Fort McMurray fire, which was matched by TD Bank and the government,” Jones recalls.

With that simple act of giving the conversation became what they could do as a group that would raise funds and allow the residents of Castle Peak to pay it forward.

Liam Dwyer then shared that he was hearing a lot of great stories on the deck of the home as residents took in the evening air.

“These stories are poignant,” he says. “They shouldn’t be lost. If they are lost they are going to be lost when we go. They will never be recorded and no one will know what they are.”

The idea of a collection of stories and poems was born. As Dwyer tells it, they then began to badger residents for their recollections or key moments in their lives.

Dwyer says they are stories that will make you laugh, and cry and warm your heart. They include childhood experiences, romances that flourished and some that failed. And stories of the Nazi occupation of Holland.

Jones,  and Dwyer along with Edith White set about the task of getting the stories of the residents on paper and then transcribed. Some residents are blind, others are deaf, so the group needed to be creative and diligent in getting what became 52 stories and poems.

White tells the story in the book of her husband and how he was blinded when his vehicle went over a landmine in Holland in World War II.

Her husband soon became bored with his recovery in a British hospital and with another soldier who had suffered a double leg amputation, they went on an unauthorized excursion. The pair ended up in a pub getting drinks bought for them for the better part of two days before returning to a ward that had been turned upside down looking for them.

The commanding officer leveled an Away Without Leave charge and ripped her husband a week’s pay. After asking if they had had fun, that was quickly reduced to three days and then finally a request “that if you don’t have anyone to go with next time, call me.”

The three have been on a steady tour of speaking engagements promoting the book, and once after a guest spot on Fresh Air on CBC Radio, saw a few hundred units sell very quickly.

Dwyer has the most writing knowledge having penned seven murder mystery novels along with two other books. He knew the ins and outs of getting a book published, and once they had their inventory filled, the task of editing and layout began.

Dwyer is proud of the fact their book is in the national archive, with two copies there for now and into the future.

He points out that since the publication of the book 13 contributors have passed away, pointing to the importance of acting quickly to get people’s stories recorded for history’s sake.

A number of local charities have benefited from the donations over the past year and a half. Most recently the Bracebridge Salvation Army, Children’s Foundation of Muskoka and Andy’s House (a hospice in Port Carling) have each received a thousand dollars from the At Your Age? sales.

“The tendency of society is to write us off,” Dwyer says of him and his generation. “We have accepted the challenge to not only record events in our lives for all to read, but to benefit the community by donating the profits from the sale of At Your Age?”

You can buy At Your Age? in Bracebridge at Veranda, Castle Peak Retirement Home, Coles in Huntsville, the Steam Boat and Discovery Centre in Gravenhurst and The Sleuth of Baker Street in Toronto.