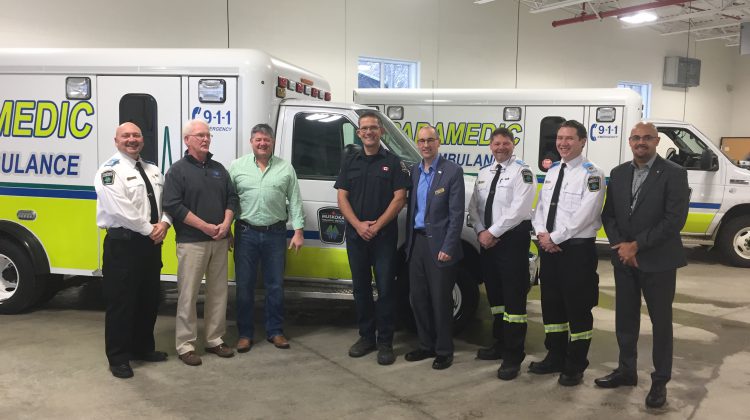 A retired Muskoka ambulance is officially on its way to a new life of service in Guatemala.

The District of Muskoka and Muskoka Paramedic Service held an official send-off for the vehicle on Tuesday, with various dignitaries attending to say goodbye.

The vehicle was declared surplus by the district Corporate and Emergency Services committee recently. Huntsville Mayor Scott Aitchison suggested the ambulance, which is still in great condition, could do some good in the underserved country.

“Generally when we are done with an ambulance we auction it off and get around $6,000 or $8,000 for it, which is nothing in the grand scheme of things,” says Aitchison.

The district reached out to GlobalFire, a Canadian charitable organization, to find the right match for the emergency vehicle. GlobalFire Coordinator for Operation Guatemala Rescue Marcello Calvinisdi knew Guatemala could make great use of the vehicle. He says the ambulance will serve a region with a population of nearly 215,000.

“They only have one ambulance there and it doesn’t have the equipment this ambulance has,” says Calvinisdi. “People actually are dying in their homes for not having ambulances in that area.”

He says the ambulance will also be able to transport patients in life-threatening condition quickly to the country’s capital city.

Muskoka resident Mike Koop is a friend of Calvinisidi and is credited with connecting Aitchison with GlobalFire to set up this donation. Koop says when he heard about the overwhelming need for emergency vehicles and equipment in Guatemala, he knew he had to do something to help out.

“People are dying in their homes and firefighters are running into burning buildings in their street clothes, there’s just no equipment for these guys,” says Koop. “Right away I wanted to call Scotty to see if there was an opportunity for decommissioned equipment.”

But, Koop says his work doesn’t end there.

“We really want that just to kick-start an ongoing fundraising campaign in Muskoka,” says Koop. “We’re going to have a giant Texas Poker fundraiser in Huntsville, and then we’re going to continue events throughout the year.”

Koop says the money would be used to pay for more equipment to help these emergency workers in Guatemala save more lives.

The poker fundraiser will run on February 9th and you can keep up to date with this and other fundraising events for the campaign on MyMuskokaNow.

Retired District of Muskoka Ambulance to Finish Life in Guatemala