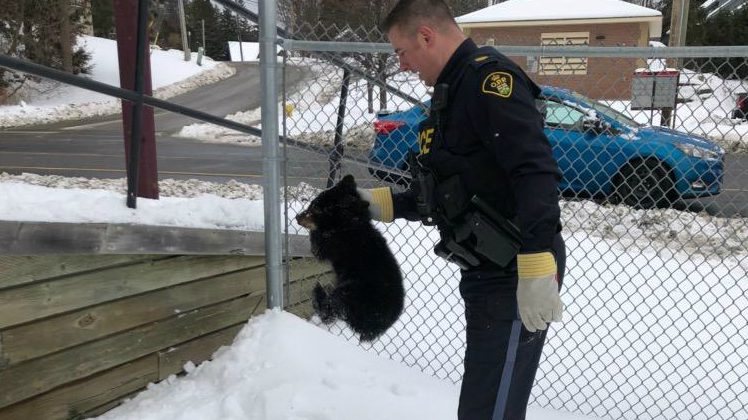 A bear cub that has been separated from its mother is safe.

Huntsville OPP tweeted the outcome of OPP Sergeant Dave Pinchin helping to trap the cub yesterday. It had been spotted around town, alone, for the previous couple of days.

The young animal was found near the bridge area in downtown, at King William and Church Streets.

The orphaned cub was picked up by Howard Smith of the Aspen Valley Wildlife Sanctuary, where he will be held until at least the summer.

According to Jan Kingshott, the Director of Animal Care at the Sanctuary, cubs getting separated from their mothers is a lot more common than we think.

“I think there is a lot that we never see,” she offers. “That they never end up in towns like Huntsville.

“But this year, there seems to be quite a few that are orphaned. I know Bear With Us (another wildlife centre specializing in bears) is full and we have quite a few.”

Kingshott says the youngster is under-weight and will not be able to go into hibernation until it has gained back some weight. By her estimation that could be a few months.

“So we will probably end up feeding him for the next couple of months,” she explains. “If they reach a weight and there is still a few months left in winter then we will hibernate them for a couple of months.”

The feeding process is delicate because it is unknown what the cub has been eating up to this point and how much. So Kingshott says they introduce food slowly.

“We’re just very careful what we feed them because we don’t know how much food they have had,” she says. “We start slowly, with a little bit of food at a time, small amounts throughout the day.

“And then we slowly increase until they get a full diet.”

In terms of getting a bear to hibernate, it is all about how much they weigh.

“It is actually really natural for bears,” explains Kingshott. “They do want to hibernate once they hit a certain weight. You just start pulling the food back and they’ll naturally go into hibernation.”

Once they reawaken in the spring the now much larger bear cub will spend another couple of months getting fed before being released back into the wild in the summer.

The Aspen Valley Sanctuary welcomes donations of fruits and vegetables to help feed their animals. There are also a number of other ways to support the organization.  To visit their website, click here.