Is There a Pump Track in Bracebridge’s Future? 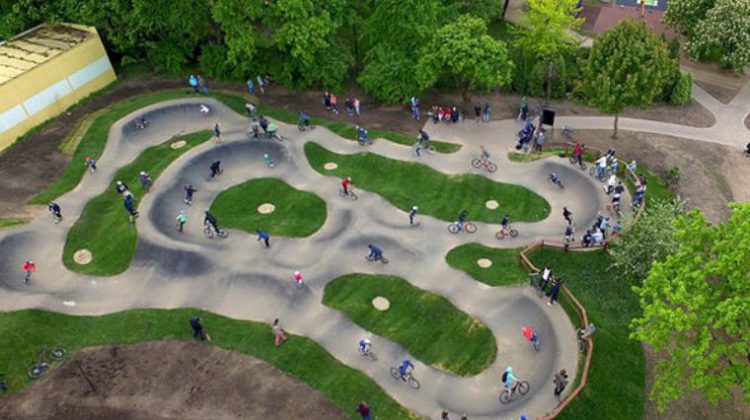 The town of Bracebridge might be getting a pump track.

Your first reaction might be, what’s a pump track? It resembles a BMX bike track in terms of having hills and tight turns but people riding their bikes on it don’t pedal. Instead, they use the momentum from the slope and grade of the track to build speed and race through various tight transitions.

Mayor Graydon Smith was recently invited to view a private pump track that is set up on a resident’s property.  He was impressed and says the town would be interested in building one.

It would be another addition to the recreation department in terms of offering local youths and adults alike to ride on the popular tracks.

I did. They were awesome! Planning for one is is now part of our business plan. Might need to be modest to start. 😉 #Bracebridge https://t.co/H2AqfbaADV

Smith points to the town’s skateboard park as a good example of building infrastructure that gets a lot of use.

“It’s well used. I know there is demand for other facilities in the community. A lot of people want a splash pad,” he says. “Of course people want an arena rebuilt, we’re working on that.”

He knows people are looking at a lot of items on a recreation wish list, and he insists a pump track will not suddenly displace other projects being planned for.

“Nothing is queue jumping here, but we are working on a plan to always be looking at things to make Bracebridge better,” said Smith.

In terms of location Smith says it should be somewhere central and easily accessible by bicycle.

“I think we want to keep it somewhere near an urban area,” offers Smith. “We don’t want it far out of town where people can’t access it. Ideally, you would be able to ride there, use it, and then ride home.

“That limits the number of locations but somewhere like Kerr Park or something like that would probably be ideal.”

Smith says there may be an element of fundraising attached to this project and notes there are a number of interested people willing to help.

“Yeah, we’ve seen a lot of that done,” he says. “A lot of projects did go that route in the past.  I know there is interest from those in the community that reached out to me and wanted to get the ball rolling on that. And I want to thank them for that. Otherwise, I wouldn’t have known about it.”

The next steps are doing some research and taking the time to make the right decisions between the new council, staff and key stakeholders.

“So if it can be quick and good, great,” says Smith. “If we have to take a little time off to make sure that it’s done the proper way then we’ll take that time.”