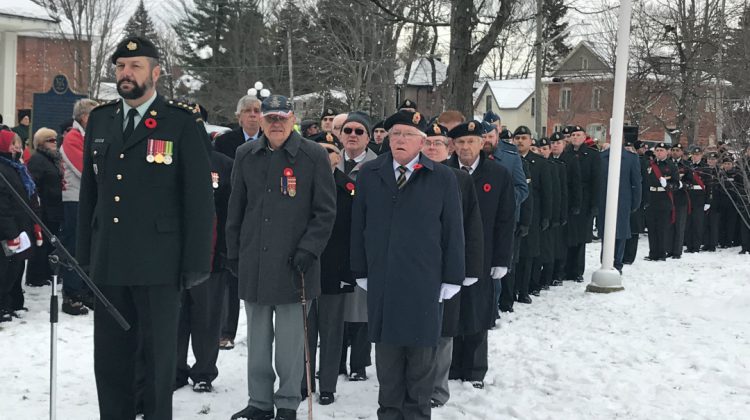 Many area veterans made up the parade that entered the Memorial Park Cenotaph area. (Doug Crosse Photo)

Muskoka remembered its fallen heroes and those who served in the military with two ceremonies today. 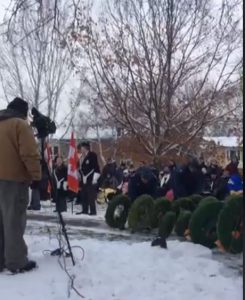 A view from the Huntsville Cenotaph at the Royal Canadian Legion on Remembrance Day. (Moose FM Screen Grab)

Over three hundred were on hand at the Huntsville Cenotaph at the Royal Canadian Legion. At Memorial Park in Bracebridge, nearly 800 people gathered for the Remembrance Day ceremony, which was marking the 100th Anniversary of the Armistice and end of the First World War.

Retired OPP Detective Inspector Bruce Kruger was the Master of Ceremony through the one-hour event in Bracebridge.

At one point he spoke of the fact that Post Traumatic Stress Disorder has been recognized as a very serious cause of many suicides by members of the military, not just now, but through the two world wars and beyond.

Mrs. Shirley Campbell was the area’s Silver Cross Mother, while the District of Muskoka was represented by veteran Jack Ellis.

Through the course of the ceremony in Bracebridge 32 wreaths were laid by a variety of military, emergency services, and community organizations.

The Bracebridge Legion Pipes & Drums led the parade of veterans, and other groups onto the Memorial Park grounds.

Both ceremonies had an honour vigil overnight in the biting cold, with local cadets standing on guard into the morning hours and the start of the main ceremonies today.

There was a number of smaller ceremonies held around the region as well.

At sunset (4:45pm local) in Bracebridge, there will be ringing of the bells at the Fire Hall on Taylor Street and also at St Thomas Anglican Church, with each being struck 100 times to commemorate the 100th Anniversary of the Armistice.