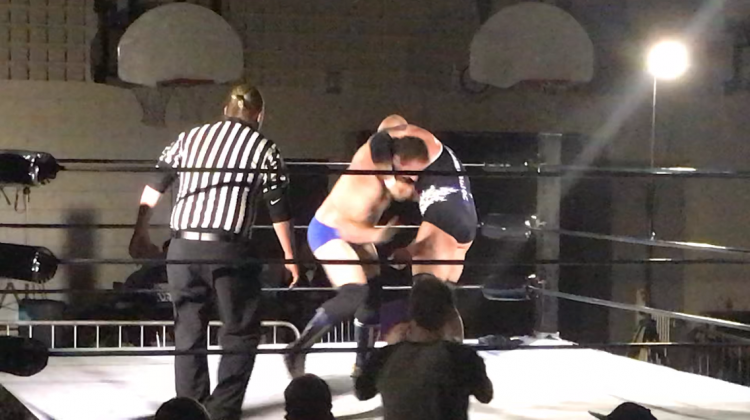 Wrestlers mixing it up at the Bedlam in Bracebridge event at the Bracebridge Muskoka Lakes Secondary School. (Doug Crosse Photo)

Big Brothers and Big Sisters of Muskoka had plenty of people fighting for them last night.

A wrestling card called Bedlam in Bracebridge was held at Bracebridge Muskoka Lakes Secondary School, with five bouts in total. Proceeds from the evening will benefit the organization, which establishes mentorships between kids and adults.

The night featured a Canadian Championship match between Tyson Dux and Cody Deaner. Deaner took a controversial but crowd-pleasing win as the previously unconscious referee came to in time to get a three count for the popular grappler.

Moose FM’s James Bowler is on the board of Big Brothers Big Sisters Muskoka and was pleased with how the night went.

“It’s a lot of work, a lot of getting sponsors, gathering a lot of interest, but overall the rewards really outweigh the work we put into it,” he says. “It was a good time, we really enjoyed ourselves.”

Well over 100 fans were in attendance, responding to the heroes and the heels with good-natured verbal jabs going both directions.

“Bracebridge really turned out to the show in force and overall that is the most important aspect,” Bowler says.

Currently, the Muskoka chapter of Big Brothers Big Sisters has a number of boys and girls waiting to be matched with an adult for mentoring. You can check out their website for more information.