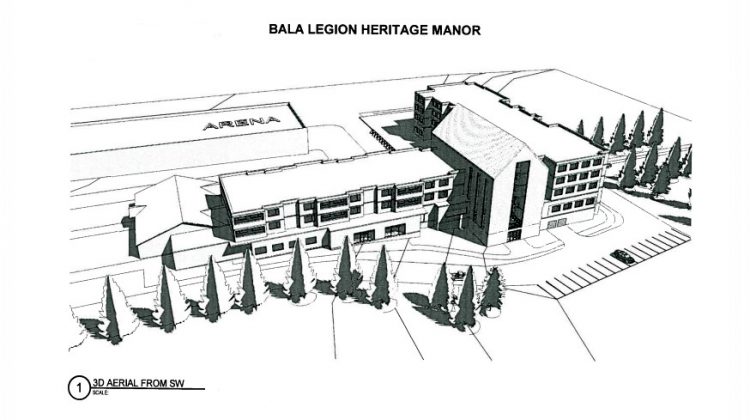 An affordable senior housing residence set up on Bala Legion’s land could move from dream to reality by spring of next year.

“We’re preparing a presentation for what they call the Chain of Command, which means the head of the Legion for all of Ontario, will receive our presentation,” says Mills. “We will explain the vision and lay it out and they will tell us the things we need to do to get their approval.”

He says they hope to have approvals and funding in place by February, which could lead to shovels hitting the ground by the spring.

The plan for proposed 134,000 square foot facility, which would offer 120 assisted living rooms, was created when Bala Branch officials found a similar facility being run by a Legion in Victoria, BC.

“That Legion was running into challenges financially 10 years ago,” says Mills. “The President said look we have this excess land, let’s develop it into an affordable base for veterans, first responders and people from our community.”

Mills says his branch has a similar plan for how the rooms would be offered to seniors in the community.

“We know that there’s a desperate need for affordable housing in the area, within a half hour of Bala, there’s a waiting list for affordable housing that’s just over 700 people,” says Mills.” The membership in the Royal Canadian Legion will obviously be part of the journey and our membership includes, as much as veterans and first-responders, seniors and younger people from the community.”

Mills says the idea of using Legion-owned land for this type of facility is a no-brainer.

“The Royal Canadian Legions are the second-largest landowners in Canada,” says Mills. “There’s potential here to use this as a model for many different Legion centres right across the country.”

He says the Bala Branch’s proposal to take advantage of this land has caught the attention of the federal government as well.

“Adam Vaughan (Parliamentary Secretary to the Minister of Families, Children and Social Development) has always seen from hour one, the possibility of this being a prototype project for Legions across the country.”

And with that interest comes the possibility for government funding as well.

“The vision is essentially that the private operator of the institution would probably invest about six or seven million. The government of Canada and the province would probably come up with a grant that would be somewhere in the neighbourhood of $5 million.”

The total estimated cost of the facility is around $21 million and Mills says the remaining cost would likely be covered by a $14 million dollar low-interest mortgage from the Canada Mortgage and Housing Corporation.

The facility would be located just behind the Bala Arena in the heart of the community.