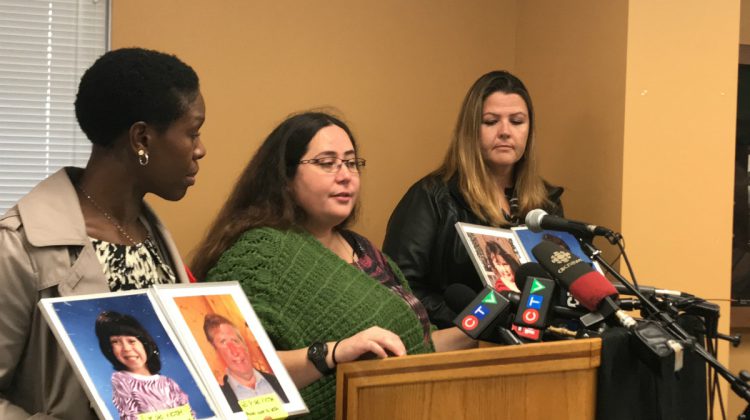 Jennifer Neville-Lake, flanked by pair of friends offering support, show pictures of the family she lost in 2015 because of Marco Muzzo's drunk driving. (Doug Crosse Photo)

Marco Muzzo has been denied both day parole and full parole at a hearing in Gravenhurst.

The parole board was hearing the case at Beavercreek Correctional Institute and it included the reading of victim impact statements by the family, who used the name ‘victim’ when being introduced to the proceeding.

Muzzo was applying for parole after serving just two years of a ten-year sentence for killing three children and the grandfather of the Neville-Lake family in 2015. He was sentenced in March 2016, forgoing a trial. Muzzo was returning from a bachelor party in Miami when he hit the van carrying the children, grandfather and the two other members of the family. He also has been banned for driving for 12 years.

In reading the parole board’s decision it was revealed Muzzo can make an appeal up to two months after today’s hearing.

Neville-Lake said she was not convinced Muzzo has accepted what he has done, finding many of his answers in the hearing to lack compassion or understanding.

The parole board, along with the media, heard for the first time about an incident at a Vaughan strip-club in 2012. Doormen at the club determined Muzzo was intoxicated and denied him entry. He then began threatening the staff and police were called. He was arrested and put in the back of a cruiser where he then tried to kick the windows out. His total of ten driving infractions was also introduced as evidence.

When asked if there was anything Muzzo could say that would signal he is ready to rejoin society as a free person, Neville-Lake was resolute, saying simply. “No.”