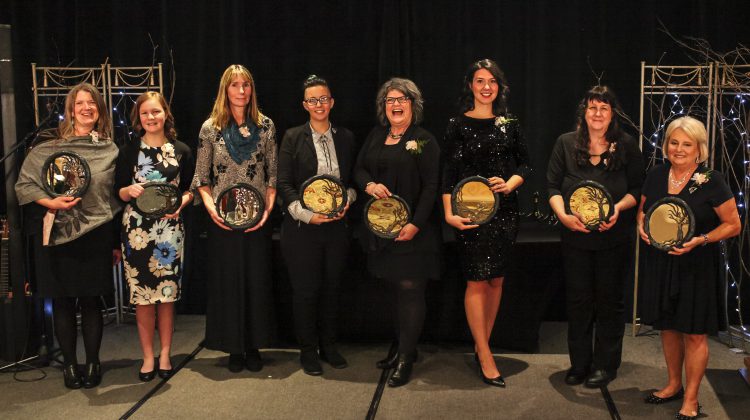 Eight women in Muskoka have been honoured by the YWCA.

Each has won a Women of Distinction Award. There were 19 nominees in total with the winners announced last night at the Mark O’Meara Ballroom in Huntsville.

The women up for the awards were nominated by other people in the community. The eight winners were Janine Marson, Kennedy Watson-Brown, Michele Meadows, Kathleen May, Kelli Ebbs, Nancy Osborne, Gundy Upans and Ashleigh Whipp.

The keynote address was given by Michelle Emson, a public speak and human rights activist. Emson spoke about receiving her Women of Distinction Award last year: “It gave me confidence and allowed me to commit to my community and do more than I ever imagined,” Emson said. She also spoke about the current situation for women and marginalized groups in Muskoka and the need for equity. “All it takes is for one person to stand up for what matters to them…Muskoka, are we going to stand with them?”

Huntsville’s Kelli Ebbs’ belief in resilient communities is rooted in good, clean food. This comes from being from a family of Manitoban farmers and her array of experience in food and activism work. She literally fed her 3 boys by foraging, fishing and growing food to fill the pantry.

In 2014, Kelli helped conceptualize the non-for-profit Muskoka North Good Food Co-operative, which has since resulted in the development of a community kitchen and Cannery, the Uproot Community Café and an expanded Grocery Market, prioritizing regionally produced food. These expansions support local food producers, and provide a place for community members to cook, enjoy wholesome food, and expand their knowledge.

Kathleen is a speaker, writer and activist from Huntsville. Stirred by feminist authors, Kathleen writes a popular feminist blog. She also writes beautiful travel pieces and has participated in The Novel Marathon, recently taking home the award for best adult novel.

As an activist, she often organizes rallies, strikes, marches and vigils. She was instrumental in starting the Women’s Movement/March in Muskoka.

Kathleen works for two women’s shelters in Muskoka and as a coordinator for the “I Got This – Unlocking your Instincts” women’s programs. She volunteers with Muskoka Parry Sound Sexual Assault Services as a survivor mentor and crisis-line volunteer. She co-founded the Huntsville Women’s group, a welcoming and inclusive group for all women.

Currently, Kathleen works as a Community Connector for Women’s March Muskoka and is preparing for the second season of the YourTV show “Herstories”.

Huntsville’s Janine Marson is a trained landscape artist whose commitment to fostering the artistic spirit in others has included teaching for the Haliburton School of Art and Design and sharing her passion with hundreds of students at her own studio.

Janine shared her art skills with Terri Howell, her “matchstick”, who inspired her to reach for higher goals. Janine is also grateful for the support the WIB program gave her to rediscover herself.

Her love of art extends to cooking which spurred her to organize cooking classes at All Saints’ Anglican Church. She designed and led “Stirred Up” and “Stirred Around” for youth and teens. The group provided the local food bank with fresh baked bread.

Janine volunteers with Muskoka Arts and Crafts and The Huntsville Art Society. She also shares her time and talent with Oxtongue Lake for Arts and Culture.

Michele’s vision is centered around connection, knitting a community together by sharing and bonding through the common elements of making something beautiful and tangible, and passing that skill on to the next generation.

Self-employed for twenty-five years, Michele lives in Bracebridge and runs the popular Muskoka Yarn Connection. She teaches classes, designs knitwear patterns for two major yarn companies and produces video tutorials. By teaching her skills to others, Michele encourages creativity to blossom. She mentors local women to help them start their own journey in business.

Michele’s goal-oriented mindset allowed her to self-publish her first sellout book and receive the Michael Foster Award for photography; her design was also featured in a national magazine. Michele’s background in fashion design instilled a passion for colour and texture, the constant spark which keeps her creative process burning bright.

At 17, Nancy joined the Canadian Forces as a Private and one of the first women in a male only branch. She retired as a Senior Officer. The Huntsville resident was a ground breaker who took a special interest in the women who followed, acting as a mentor, easing their way to their own successes.

Nancy was among the first women recruited by the UN to provide access negotiations for humanitarian operations in the world’s most dangerous countries. Nancy took the lead to develop training to empower UN women. The demand grew exponentially, and she trained 18 additional women­ facilitators before retiring again.

Having been brought up in very difficult circumstances, Gundy was not exposed to altruism. Life was a scramble to survive. But when Gundy, who lives in Huntsville, became a parent of a severely disabled child, she realized volunteers could change lives.

As a 24/7 single parent caregiver, Gundy chooses volunteer activities where her son Michael can be included, like The Dwight Lions Club. Gundy also volunteers a significant amount of time at Rogers Cove Retirement Home and the Lake of Bays United Churches.  She was treasurer at Community Living Huntsville for six years and continues to advocate for this agency. Gundy received a Medal of Merit from Scouts Canada for her work with disabled youth.

Kennedy is a 13-year-old Huntsville High School student who leads by example as a community volunteer in Port Sydney.

During her years at V.K. Greer P.S, Kennedy was known as a kind and polite student, and a willing helper. She demonstrated responsibility and teamwork in school plays, band, Santa’s Bazaars, Spirit Days, and assemblies.

At age 3, Kennedy began canvassing for the Canadian Cancer Society with her father. She has grown up lending a hand, at Knox United Church and events such as Canada Day, Turkey Dinner, and the Tree Lighting.

At age 11, Kennedy loomed and sold hats for her classmate’s medical-needs fundraiser, ‘Donate For Nate’, and became a hair donor for a cancer patient wig program.

Currently, Kennedy is knitting for a Prayer Shawl outreach and considering a career in Early Childhood Education.

Ashleigh is the Children’s Librarian at Bracebridge Public Library. At age 29, Ashleigh was diagnosed with Non-Hodgkin’s Lymphoma and started chemotherapy on her 30th Birthday. Ashleigh underwent 6 rounds of chemo and 15 rounds of radiation. This October marks her third year of being cancer-free.

After recovering from treatment, Ashleigh moved to Bracebridge to take the position of Children’s Librarian. Since joining their team, she has organized and implemented programs such as: Toasty Teens, a donation-based winter coats and mitts programs; Back to School Backpack Giveaway, families are provided new backpacks with back to school essentials; a teen mentoring program; a designated teen area; a teen book club and Dungeons and Dragons club night.

Ashleigh is also an active participant in the “Get Ready for Prom” initiative where teens can choose a free prom or graduation dress.