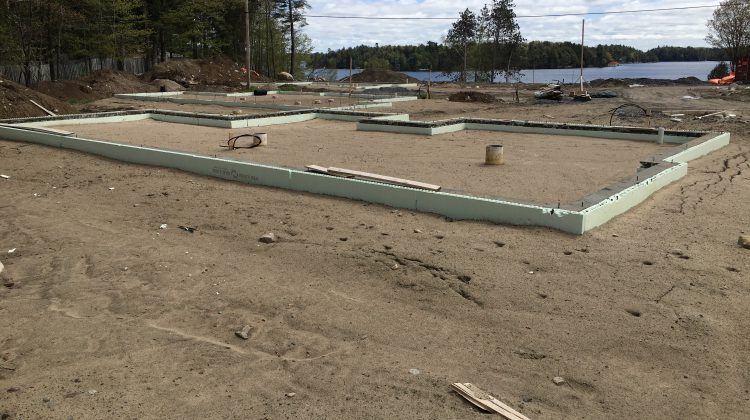 A few finished foundations are all that shows of the 43 unit Legacy Cottages development in Minett. (Paul Richards Photo)

Concerns about the intentions of developers in Minett are warranted says one longtime resident.

Since 1938 Paul Richards and his family have lived in the village of Minett on a property adjacent to the much talked about development being created by Legacy Cottages. Construction on that resort land has halted following the passage of an interim control by-law by the Township of Muskoka Lakes this past May.

But Richards says the builders could have continued with the 11 units already underway. He is more concerned that if all of the 45 units proposed are built the owners of the units will apply to convert them from resort units, for which they are currently permitted, to condo/residential units.

My Muskoka Now News asked spokesperson for the developers, Greg Knight why construction had stopped on the 11 units. He confirmed that they could have continued construction, but without being able to service the whole lot properly with power, drainage etc. for 45 units, it was not financially feasible to continue on the reduced scale.

Richards says the real issue is the use of those properties.

“What they do is get their building permit, they build and then they apply to condo/residential,” claims Richards.

This is a claim Knight wholeheartedly disagrees with.

“We absolutely have no intention of doing that,” said Knight. “There are signed agreements with purchasers that deal with that issue specifically.”

If completed the 43 units would be sold to individuals as rental units for the purpose of commercial use. While an owner could stay at a property it could not be for exclusive use of that owner and would have to be available to the public for rental purposes.

“The by-law is very clear that they must be a commercial venture with onsite management in a rental pool, and cannot be used as residential,” states Richards. “It is very clear.”

It was a full house for the January meeting at the District of Muskoka. (MLA Photo)

Richards underscores the fact that other developers have fallen afoul of this by-law and their cases will be heard by the Local Planning Appeal Tribunal next month. The LPAT replaces the Ontario Municipal Board Tribunal.

An online publication produced by the Muskoka Lakes Association from its Winter 2018 edition reported on 300 residents attending a January meeting at the District to protest applications for Villas and Touchstone Mist from fractional ownership or commercial use to residential. The article notes the Villas applied in November of 2017 to “slip out of District conditions that the units on the site be rented out for at least 10 weeks a year.”

In January there was a hearing regarding Touchstone’s appeal that the resident’s appeal of the approval by the District for condo/residential was “frivolous”.

Richards also points to a previously unknown water study undertaken by Ken Fowler Enterprises that revealed as of 2008 the use of the waters off Minett was already over capacity.

“We didn’t find out about that study until this spring,” Richards says with an ironic chuckle. “In 2008 it was already over-capacity for safe boating.”

“That was before the Marriott was built,” he says “Imagine what it was like after that.”

The Friends of Muskoka tried to illustrate what marine traffic might look like if the proposed 4,000 resort condo units were completed. They organized over 200 boats to gather off Wallace Bay in Minett this past August.

Ken Fowler Enterprises has launched a $22 million lawsuit against the Township of Muskoka Lakes stating the introduction of the interim control by-law has damaged their development and future sales of the Legacy Cottages project.

A second press release from the developers yesterday protests the exclusion of five applicants provided by KFE to sit on a steering committee created by an independent planning group organized by the District this past July. Of the 40 names presented for consideration, none were selected from Fowler’s pool.

Richards had also applied to be on the committee but was notified in August he was not successful.

Fowler Enterprises Disappointed with Being Shut Out of Steering Committee