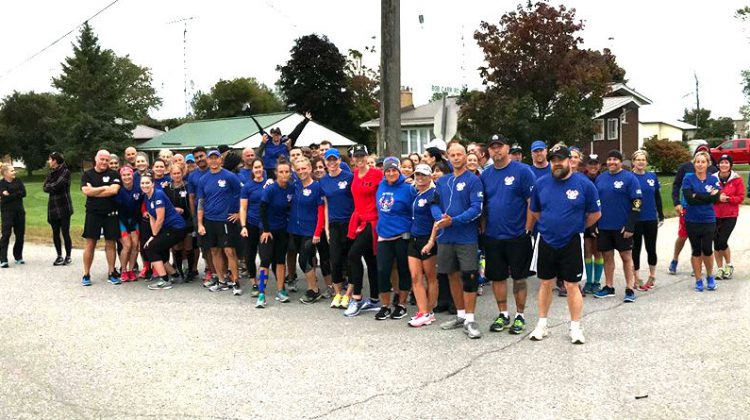 A run by OPP officers from Queens Park to Ottawa has some Muskoka content.

Constable Erin Gorrie of the Huntsville detachment is confirmed as participating in the two-day event. 250 officers from around the province are covering the 460 km distance in a series of relays from Toronto to Parliament Hill. Along the way, there are ceremonies held in a variety of locations.

The run began in 2005 with members of the Peel Region police force conducting the first relay. It has since expanded to including many members of the OPP from around the province.

Officers will be present for the Canadian Police & Peace Officers Memorial 2018 on Sunday morning.

Three Ontario Provincial Police officers from the Muskoka region and one North Bay Police Officer who was a native of Bracebridge are part of the national memorial.

72 bridges in the province have the names of fallen officers, including a number through the Muskoka region.

Shortly after 2:00am on the morning of July 20, 2005, two Bracebridge OPP officers were dispatched to a domestic dispute call west of Bala. The two officers in a marked OPP cruiser were travelling westbound on Muskoka Road 169 when they were involved in a collision with a moose crossing the roadway. After striking the animal, the cruiser came to rest in the south ditch. The weather was foggy and the moose was on the roadway at the time of the collision. Constable Potts was driving the cruiser and was pronounced deceased at the scene.

Cst. Slater was responding to a call regarding a fellow police officer who had been shot by a man with a shotgun lurking in a parking lot. He arrived at the parking lot and was searching for the gunman but was shot in the back of the head.

On January 1, 1981, two men had stolen some rifles from a cottage and proceeded southbound on Highway #11 with the intent of robbing a gas station in Burk’s Falls. During the attempted robbery they shot and killed a gas station attendant. They were spotted by Constable Verdecchia just south of Huntsville and at approximately 0050 hrs. the vehicle turned onto Highway 141 where it went out of control and became stuck in a snowbank. Constable Verdecchia stopped, then approached the right side of the vehicle. He was shot through the open passenger window. His assailant then got out and fired several more shots into the officer. The assailant and his accomplice then threw the body of the officer into a snowbank and fled. His body was recovered 7 hours later. Just north of Orillia on Highway 11 Constable Neil Hurtibise stopped the fleeing suspects and exchanged fire. He was shot several times but managed to return fire. The suspects fled the scene and were apprehended later in Orillia.

PC Wickens was on routine patrol on Highway 11 north of Washago on May 10, 1960. A southbound cement truck loaded with 25 tons of cement began to drift into Wickens lane. The truck hit his vehicle and rolled over on it. Constable Wickens was killed instantly.