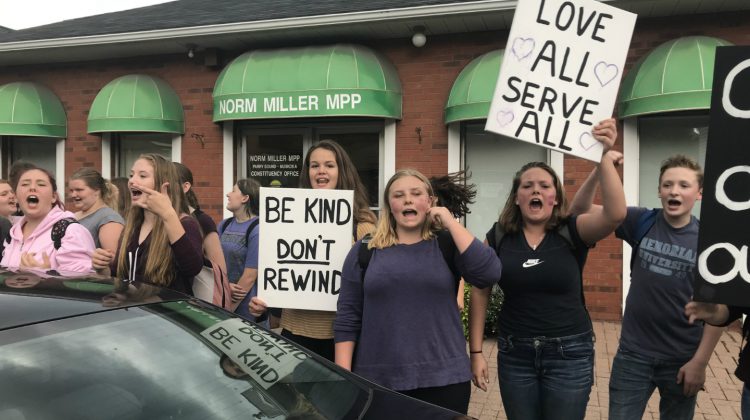 The walked out as part of a province-wide protest by students over the Ontario Government’s reversion of health and physical education to the 1998 curriculum for elementary school students. 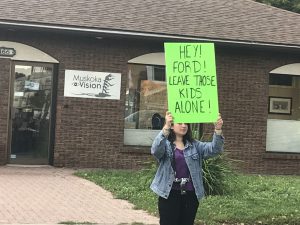 High schools are still teaching the program introduced by the Liberals in 2015.

Kendra MacDonald is the organizer of her school’s protest and she was pleased at how many students participated despite the rain and the long-distance march to Parry Sound Muskoka MPP Norm Miller’s Manitoba Street office in Bracebridge.

“We spread the word more and had an interview with the Moose,” MacDonald explains. “It’s a lot more people, a quarter to half the school.”

She says the idea behind the protest is to let the younger students know they are not being forgotten by the students who have come before them.

“Although we are not learning it anymore it’s important for their generation too,” she says. “With sexual identity crisis and things like that we didn’t want them to feel left out or isolated which can then bring on mental health issues.”

MacDonald also says some students are trying to activate their parents into the protest and update them in terms of the lives of a modern teenager.

“I think some people’s parents were learning on the old curriculum so they are not open-minded to the LGBTQ+ communities and we wanted to educate people more on that and the fact that it is a part of who everyone is now,” she says, as car horns blared support to the protesting throng.