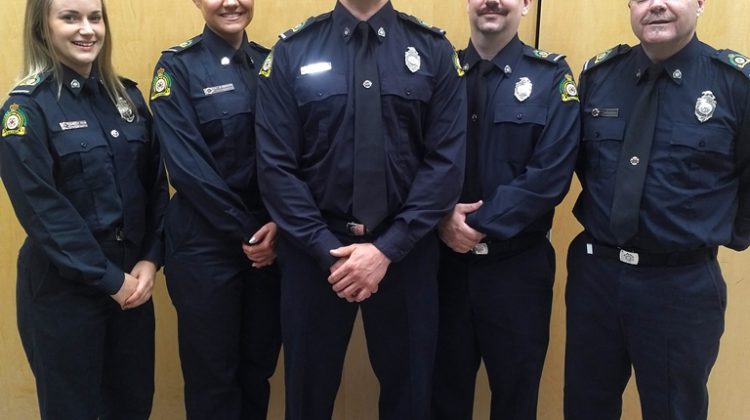 There was a graduation on Thursday night, but instead of caps of gowns, these grads will be wearing helmets and breathing apparatus.

The Gravenhurst Fire Department welcomed its Class of 2018 firefighters.

The five new recruits, two women and three men, bring up to 60 the number of volunteer firefighters keeping Gravenhurst safe. 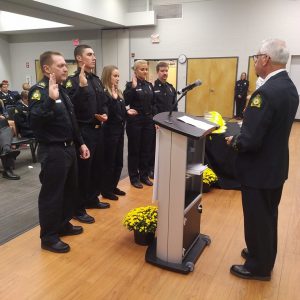 Class of 2018 Firefighters are sworn into the Gravenhurst Fire Department. (Supplied Photo)

For Chief Larry Brassard it is an exciting period of growth as the ceremony also featured retirements, promotions and service awards.

“Bringing new firefighters onto the fire department is an exciting time for us,” Brassard told the My Muskoka Now Newsroom. “Five new firefighters have just finished a year’s worth of training to become firefighters so the ceremony was really a culmination of their efforts.”

The recruits returned some of the admiration being shown them by sending a message to Training Officer Tracy Jocque. “Without you guiding and helping us every step of the way, I’m not sure any of us would have made it,” said firefighter Joe Hill.

Brassard welcomes the new provincially standardized training the recruits undergo now, saying it is going to be good for everyone involved. “We’re all meeting that standard, training to the same standards across the province and that’s a wonderful thing,” he said.

Brassard contends that regardless of the size of a fire department a person is working in, fire is fire. The fact that his force is made up of volunteers doesn’t make them any less professional.

“Fire on the fourth floor of a building in downtown Toronto behaves exactly the same way here in Gravenhurst,” he says.

The evening also saw the announcement of the promotion of Lieutenant Kyle Steele along with fifteen and five-year service pins to Captain Rob King and firefighters Dave Runham and John Haines.