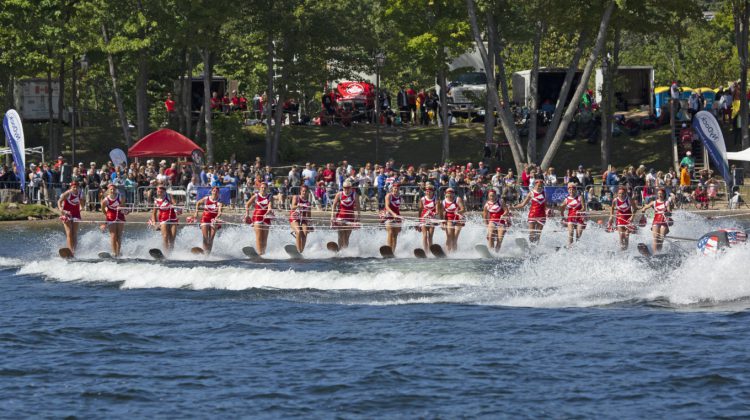 Team Canada put on a great show for the Huntsville crowd in windy conditions and finished in 3rd place. (Colin Watson Photo)

After two days of high-level water ski show competition, the USA has been crowned world champions for another year.

The win capped a busy weekend for the World Water Ski Show Tournament, which was being held outside the USA for the first time. Several thousand people kept the shores of the Deerhurst resort on Penn Lake full over the course of the event.

A ski show tournament is not so much a skills-based competition, but more of a theatrical production on water. Think like what Ice Capades is to figure skating. Each of the six countries brings teams of 35, which includes skiers, sound people, boat drivers and hosts.

They then put on a one-hour theme related show, mixing a story with various tricks which are judged and awarded points.

The USA has never lost a tournament, but from a crowd perspective, all countries were pretty entertaining based on the enthusiastic reactions of those in attendance all weekend long.

In terms of having the event in Huntsville, it has been a definite plus for the local economy with a large number of out of town visitors.