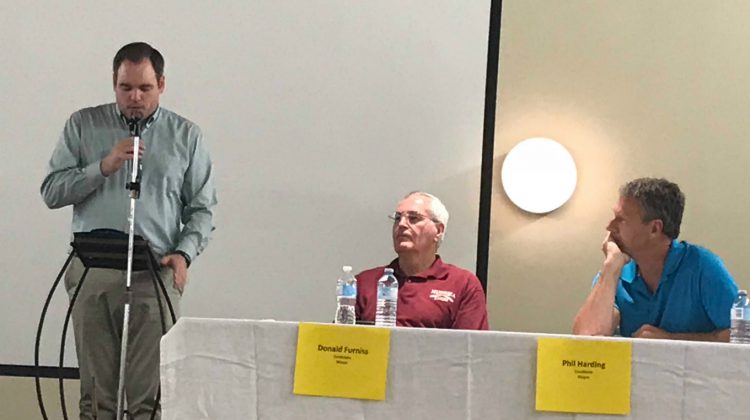 It was an interested and vocal crowd that met with candidates running for mayor, council, and district council in Muskoka Lakes Thursday.

Over 120 people were on hand to hear incumbent Mayor Don Furniss and Phil Harding go toe to toe on issues for the event organized by the Muskoka Lakes Chamber of Commerce. Third candidate Terry Ledger, a current sitting councillor for the Township of Muskoka Lakes, was a no-show and has stated her campaign will be social media based.

Furniss opened the evening with comments about how he was troubled by “squeaky wheel politics.” He said while he was fine with the squeaky wheel getting attention in certain situations it could not become an operating procedure that saw decision making based on crisis management to keep the squeaky wheel happy.

Harding took on Furniss’ theme, but turned it on its end stating, “we have a seized wheel and the train is grinding to a halt.” He spoke about two instances where citizens were vocal in their opposition to the Bala Falls hydro dam and the condo development project at Minett.

“They were very squeaky, yet our council ignored them,” said Harding, who is a district and town councillor in Ward C.

Other issues that came from a variety of questions presented by Moose FM’s James Bowler included ideas on how to better brand Muskoka’s tourism. Harding would like to see some of the regional dollars spent on promotion be kicked down to the township level to offer more directed promotion of events and things to do in the area. Furniss ceded that at the District level there might be too many players and not enough direction when it comes to marketing the area.

The issue of septic brought the crowd to attention. Furniss says over the past ten years almost every septic system in the area has been inspected. He said, “We do have the power to force changes.” The crowd reacted with a lukewarm smattering of applause.

Harding came back at Furniss stating, ‘We are not doing a good job at all,” when it came to septic inspection. “We need to have mandatory inspections,” he went on before stating emphatically, “We need to fix our septic systems.” A huge ovation followed, underscoring what a sensitive topic it was for the residents.

District and Township Councillors, incumbent Ruth-Ellen Nishikawa and Gord Carlton also took questions, but a third candidate Brian Mayer was not in attendance and no explanation was offered about his whereabouts.

Nishikawa made the point that taxpayers should not continue to be identified as either seasonal or year round. “Why can’t we all just be residents?” a statement that was met with thunderous applause.

Carlton, who was very supportive of many of Nishikawa’s statements said focusing on cycling tourism is one area he would like to see used to bring visitors into the area. Both Nishikawa and Carlton conceded the state of the area roads needs to be improved to make cycling safer.

There was only one Ward One township council candidate on hand as Glenn Zavitz weighed in on a number of topics. His chief rival in the area, incumbent Donelda Hayes, was away but a video message was played that outlined her strategies and thoughts for the role.

Sandy Currie, who had registered to run but dropped out past the deadline, had an interesting message. Since his name will still be on the ballot on election day he emphatically stated for people not to vote for him, but to actively vote for either Zavitz or Hayes. Currie withdrew due to a pending surgery that would have been in the middle of campaigning.

The two candidates for Trillium Lakelands District School Board trustee (Gravenhurst, Muskoka Lakes and Georgian Bay) Johnny Ahsome, and incumbent Louise Clodd introduced themselves and presented their visions for schools in the area.

There will be further meetings in the Township of Muskoka Lakes over the next two Thursdays. The next meeting will be held in Port Carling on September 13th, and the last will be at the Raymond Community Centre on September 20th.