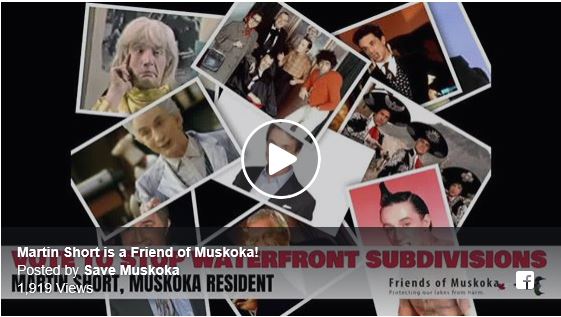 A screen grab of the audio posted on Facebook by Martin Short.

A group dedicated to stopping commercial expansion of condos into Muskoka has a famous friend helping them.

The Friends of Muskoka recently got an endorsement from comedic actor Martin Short.

The Hamilton native has a large seasonal property on Lake Rosseau and agreed to lend his voice to the protest the group has been organizing against high-density development in Minett on Lake Rosseau.

In part, Short says “Muskoka to me is one of the most incredible places in the world.”

He goes on to say, “it would be a shame for it to be destroyed by bad planning and bad development.”

The Friends of Muskoka are trying to ban the creation of residential subdivisions, which are while currently banned are potentially being created by developers using commercial resort properties to bypass the rules.

A recent protest last weekend by the group saw around 200 boaters turn out on a wet day to mimic what Wallace Bay would look like if more than 3,600 condo units that currently have approval, were allowed to ultimately be built.

Short wraps up the short audio message with a call to action.

“Please join the Friends of Muskoka and the (Muskoka Lakes Association) to stop residential waterfront subdivisions,” says Short emphatically before finishing with, “Vote to save Muskoka.”