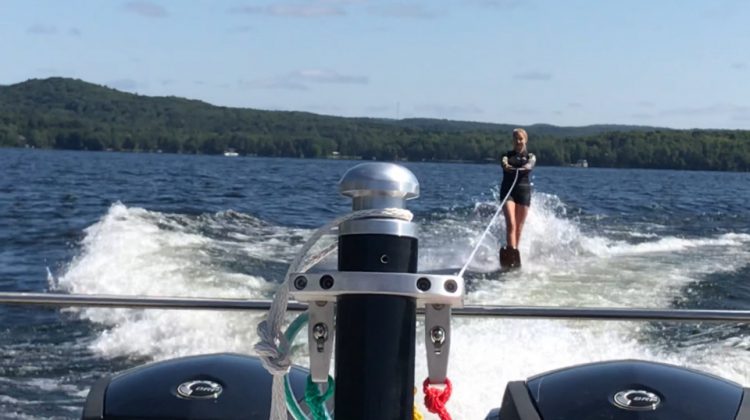 The World Water Show Ski Championships is this coming weekend in Huntsville.

Teams of water skiers put on Broadway-style shows on the water, including impressive multi-person pyramids and barefoot tricks.

To get all that done you need boats and not just your old fishing boat with a 35 HP outboard.

The media got to have a look at one of the boats that will be the workhorse for the weekend. With twin 250 horsepower outboard engines, the sleek craft delivers a kick.

On a test spin on Penn Lake at Deerhurst resort recently, tournament chair Will Bazeley showed why the boat is used to haul as many two dozen skiers at once.

As we sat on the placid lake slowly churning along and having a chat Bazeley showed where various barges, ramps, and stages were going to be situated. He then looked me squarely in the eye and asked me to get ready. With no seatbelts or rail holds, the backward facing seat on the port side had only a fabric covered floor wedge to brace my feet against.

With the flick of his wrist on the throttle, my skeleton tried to leave my body.

I have travelled on many boats, but not felt such power previously.

We are cruising around 80 kms per hour when he asks me to get ready again. I am trying to make sure my camera rig doesn’t go flying into the lake when he moves the throttle another third, taking us near 100 kms per hour. For future reference, I will bring goggles. The wind at that speed tries to peel your eyelids back into your head.

Skiers will be travelling much slower than this, but the power of these boats to keep multiple participants afloat is critical to a good display.

Six nations will be battling it out for top honours over the weekend. They include Australia, Belgium, Canada, China, and Germany. The defending champion USA is the team most competitors are watching. They bring the next level tricks. And by next level, we are talking five-tier pyramids where everyone else tops out at four high.

To provide context, that is ten broad-shouldered male skiers providing a base, followed by a layer of six, then three, two and one brave soul at the top, all while going 40 kms per hour.

There are a total of four boats that will be constantly on the move during the event. The boat towing the teams through their moves,  is driven by each country’s own driver to their specifications. Other boats are moving skiers to docks and barges off stage, getting them ready for pick-up.

It will be a unique display that the enthusiastic Bazeley says will impress people who attend the event. Ticket sales have been brisk and with an impressive bank of stadium seating, beer garden on the beach and lots of food on offer, it will be a spectacle to take in over September 8th and 9th.