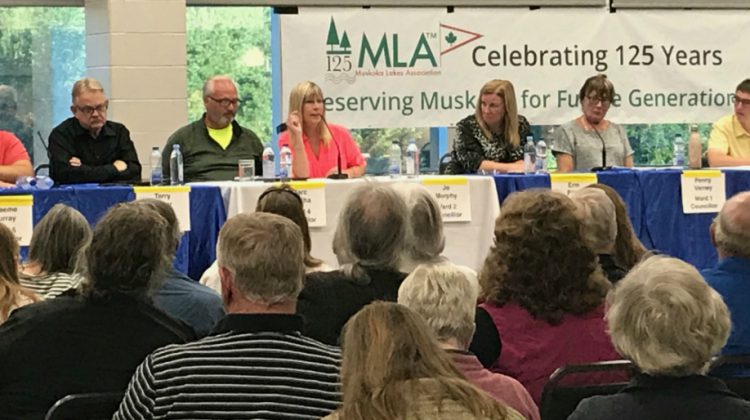 Over 100 people attended an all candidates meeting in Gravenhurst on Thursday night. (Doug Crosse Photo)

Thursday night residents of Gravenhurst got a chance to hear from the 13 candidates running for municipal office in the area.

The Muskoka Lakes Association hosted the event, with over 100 attendees.

Questions were moderated by Jim Davis, Director of the Muskoka Lakes Association and also a Director & Past President of the Gull & Silver Lakes Residents’ Association, and focused on hot-button topics such as high-density development, the environment, and off-season jobs.

Across the board, prospective councillors were against proposed developments like the one that was defeated the other evening at Gravenhurst council for Gull Lake.

A big concern was also the five-month period for residents over the winter months where people in the lower income range can be chronically underemployed, often holding several part-time jobs to make ends meet.

With questions curated ahead of time, it was a cordial conversation with moments of levity and familiarity as the group went through the rounds, with two-minute time limits.

He noted that he was looking forward to working with the new group of councillors and that there was a lot of work ahead for everyone.

“Just remember, even though I am the Mayor, it is just one vote and we all have to work together on all the issues,” said Kelly.

The only acclaimed councillor was there as well, 26-year-old Steven Klinck, son of current District Chair John Klinck.

He listened intently to the questions and says he has a lot in common with the candidates.

“I agree and echo the responses of many of the candidates tonight and I believe high-density waterfront developments are not the best idea for our town,” says Klinck. “However, I have always been a strong advocate . . . that we need to bring in opportunities to create jobs for our town to help out our middle (class) and poorer citizens so that we can all have a better life.”

The Municipal Election is on October 22nd.