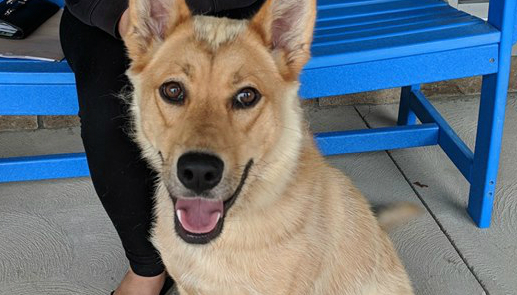 Brownie was a dog from Northern Ontario that found a new home in Muskoka. (OSPCA Muskoka Facebook Photo.)

Muskoka has proved to be an important stopover for some dogs in need.

19 dogs from communities in Northern Ontario had a rest stop in Bracebridge on their way to finding forever homes in southern Ontario.

The transfer of the dogs was through the Northern Reach Rescue Network.

It is part of an ongoing collaboration between the Ontario Society for the Prevention of Cruelty to Animals and the Northern Reach Rescue Network. They gather dogs that have no owners within a town and are considered community dogs.

Bracebridge OSPCA centre manager Jane McCamus says she has been impressed when the dogs stop in for a break at how they behave.

“The dogs have all had great temperament, social and adapted to their new settings very quickly,” she says.

The dogs coming from the north are socialized and have a routine for getting fed and finding a place to sleep at night. When it comes to vet care and looking after their health, things sometimes get missed.

McCamus reports here centre will be doing another intake of dogs that will be adopted in the Muskoka area, sometime around the end of September.

She says don’t expect a bunch of husky crosses, there are a variety of dogs up north.

“It’s been a huge variety,” she says. “All shapes and sizes. We have had some husky crosses, but it has not been limited to that.”

A previous rescue of dogs from the region resulted in some being placed within the Ontario SPCA Muskoka Animal centre in Bracebridge. While there are no northern dogs currently looking for a home at the Bracebridge centre, McCamus encourages people to check their website or come by for a visit to find a new furry friend.