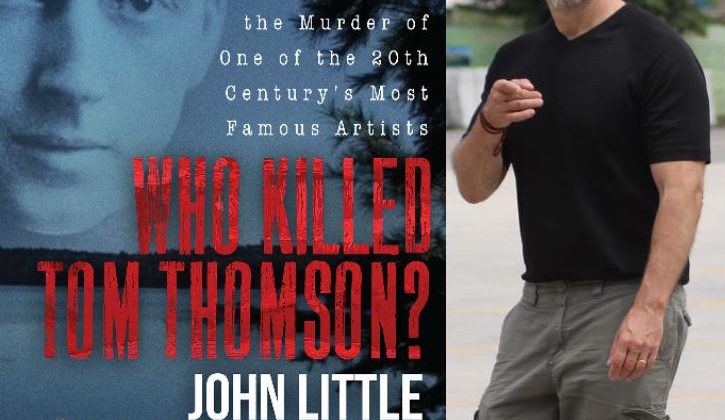 Tom Thomson was just 39 when he died under strange circumstances at Canoe Lake.

The death of a famous artist from over a century ago is still news.

Tom Thomson, an artist who would go on to receive much acclaim after his passing, was just coming into his own at age 39 when he died in mysterious circumstances in 1917.

A new book by Bracebridge author John Little re-examines what might have happened to the artist that was nearly part of the famous Group of Seven artists. His death preceded the formation of the famous artists.

Little, with the help of two recently retired homicide detectives, compiled all the information surrounding Thomson’s death and had a fresh look at the case.

In 1917 Thomson was a little-known artist with lots of talent. He sketched and painted idyllic scenes in Algonquin Park, spending whole summers there each year.

He was just as known for his abilities to fish and use a canoe. So when Thomson turned up drowned on Canoe Lake, those who knew him were surprised.

That is where the story gets interesting says Little.

“He was buried rather quickly up at Canoe Lake because his body had been underwater for eight days,” explained Little. “Afterward, people who knew Thomson were puzzled at how he came to meet his end.”

A hastily called coroner’s inquest just 12 hours after the body was found, concluded it was an accidental drowning. The coroner, however, never saw the body.

“People started comparing notes, the people that were there when the body was removed from the water,” says Little. “They saw some suspicious things.”

One was a four-inch bruise across his left temple. More intriguingly there was fishing line wrapped 16 times around his left ankle.

“This suggested to the people present that this was an anchor line,” offers Little. “This suggests that Thomson was struck with an object and his body thrown overboard with the fishing line attached to something heavy.” The second part of the mystery develops at this point. Thomson’s family wanted him to be buried at the family plot in the small village of Leith, near Owen Sound. An undertaker was dispatched from Huntsville to gather the body from its grave and transport it to the parent’s home church.

His instructions were to recover the casket, place the body inside a metal casket and seal it, which was the law for transportation by rail.

“He got to the cemetery around 10:00 that night and promptly dismissed everyone who came up with him,” recounts Little. “He was left to work alone to dig through six feet of soil, recover the casket, transfer the remains, and fill the grave back in.”

In filling the grave back in he reburied the original casket.

He did all this by himself in just three hours says Little, a remarkable feat. The metal casket was transported to Owen Sound, and the Undertaker returned to Huntsville. But a park ranger, Mark Robinson, went to Canoe Lake to visit the small cemetery where Thomson had been buried.

“He found there was only a 20-inch hole dug,” says Little. “Speculation was he lost his stomach for the job, threw some shovels of dirt in the metal casket, soldered it knowing that no one in their right mind was going to open it knowing the condition of the body.”

Little says as a result of this information many believe it was an empty casket buried in Leith.

“It was never opened in Leith so this is where the speculation and the mystery comes from,” he says. “The people that were involved including the people that loaded the casket onto the train… said it was too light to have a body in it.”

Little’s father William, published a book about the mystery in 1970. In 1956, 39 years after Thomson’s burial he and some friends went to where the park ranger had told him the body had been buried. Because there was no grave marker, and reportedly at most an empty casket, they dug down. They did find the casket, and they found skeletal human remains.

“The (skull) had a corresponding head wound near the left temple,” recalls Little.

The crime lab was alerted, the remains exhumed and sent to Toronto. The family eventually heard about it and told authorities they were not interested in any further investigation into their son’s death.

A report followed soon after from the crime lab that these were not the bones of Thomson, but instead, the remains of an indigenous person who had somehow come to be buried in Thomson’s original casket. The bones were interred back into the grave and a white cross was placed to mark the plot, so “no more amateur sleuthing” could take place.

“I grew up with this story,” explains Little. “And what always intrigued me was that every ten years or so an author would come out with a new book on Thomson and always posits a different way on how he met his end.” He even disagrees with parts of his father’s work.

“My father and I part company a few times throughout the book just because a lot of evidence has come to light since my father’s book was written,” he says. And this was the reason for a new book and a fresh look at the evidence by modern homicide professionals.

The evidence meticulously compiled and cross-referenced by Little gave the detectives a lot to consider, and in the end, the conclusion was that Thomson’s death was a murder. There are two suspects, says Little, but we won’t let this story spoil the ending.